Aerial ballet: How airplanes fill up with fuel mid-air 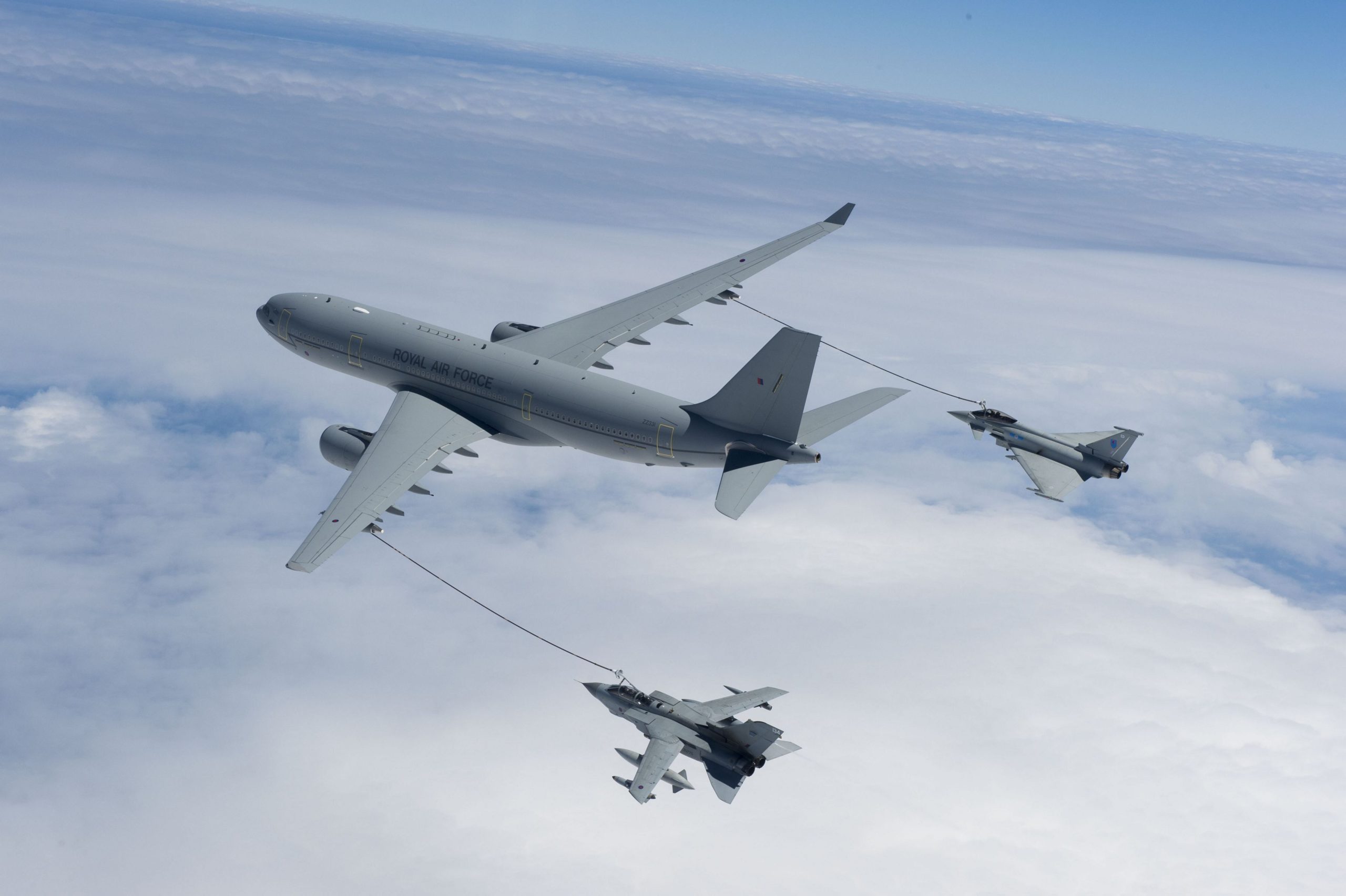 Imagine you’re zooming down the highway at 70 miles per hour and the car’s fuel gauge is on its way to empty.

Just up ahead there’s a tanker truck trailing a long hose attached to a basket that’s floating a couple of feet above the ground.

Approaching the tanker, a probe rises from the car’s front fender. If you deftly maneuver and properly seat the end of the probe in the basket, fuel begins to flow from the tanker truck into your gas tank.

Now move the whole process 30,000 feet into the air, at more than 300 miles per hour, in turbulence, at night, in bad weather — and where there’s simply no possibility of pulling over to the side of the road if you run out of gas.

Aerial refueling is a standard operation, but a challenging and critical one, for air forces around the world. Instead of requiring one or more landings on the way to a target, the ability to extend a military aircraft’s range and endurance while airborne has become a force multiplier — boosting range and ability — in mission planning and execution.

Yet another British invention

British military “boffins” have been the source of numerous inventions that changed the face of warfare. Those scientists, engineers and researchers came up with tanks, radar and jet engines. Aircraft carriers have catapults to fling planes into the air and angled flight decks to capture them when they land, all thanks to British innovation.

But the most important invention — certainly to a pilot running out of gas — might be air-to-air refueling.

In the early days of aviation, pioneering pilots experimented with crude methods of transferring fuel from one aircraft to another. Two slow-flying biplanes would fly in close formation, one above the other, and a fuel hose was dropped to the lower plane.

Once the flailing hose was captured by a passenger in the open cockpit and securely connected to the fuel tank, gravity did the rest of the work, with fuel flowing from the “tanker” to the “receiver.”

While these experiments worked — to a point — the first practical air-to-air refueling solution was developed by British aviation pioneer Alan Cobham in the 1930s.

Cobham first came up with the “looped hose” system, which was a fairly crude update of the earliest experiments that added a grapple mechanism — to help secure a connection — to the receiver aircraft.

In the late 1940s, the United States Air Force (USAF) was an early adopter of the looped hose system, equipping propeller-driven transports as tankers, and bombers as receivers for this early version of range-extending technology.

An A330 MRTT shows off its refueling boom and wing-mounted probe-and-drogue pods. Credit: Airbus

Probe and drogue vs. the flying boom

The limitations of the looped hose system — not least of which was the relatively slow airspeed required during operations — led Cobham’s Flight Refuelling Ltd. (FRL) to develop the first practical probe and drogue system.

Now, most any aircraft could be equipped with a long tube — the probe — which the receiver pilot would connect to a basket attached to the end of a hose — the drogue — deployed from a reel attached to the tanker aircraft.

In 1949, a Royal Air Force Meteor fighter jet stayed airborne for more than 12 hours in the first practical demonstration of the system.

While FRL continued the development of probe and drogue, across the Atlantic, the USAF was looking for an aerial refueling system that could transfer copious amounts of fuel to its large and thirsty strategic jet bombers.

To meet that requirement, Boeing developed the “flying boom” aerial refueling system. Instead of requiring the trailing pilot to complete the connection, a boom operator in the tanker controls the position of the boom, “flying” it into the refueling receptacle of the receiving aircraft, which holds position close behind.

Although the USAF used probe and drogue system on some of its early tactical fighter jets, it ultimately standardized on flying boom operations for all planes in its fleet.

But the USAF’s rival aviators in the United States Navy settled on the probe and drogue system, which continues to be used today.

Air forces around the world have a mix of the two systems, driven by the source of their aircraft. If they’re flying F-15 Eagle fighters or C-17 transports like the USAF, for example, then they need to refuel from a flying boom tanker. Most all other military aircraft connect to probe and drogue systems. 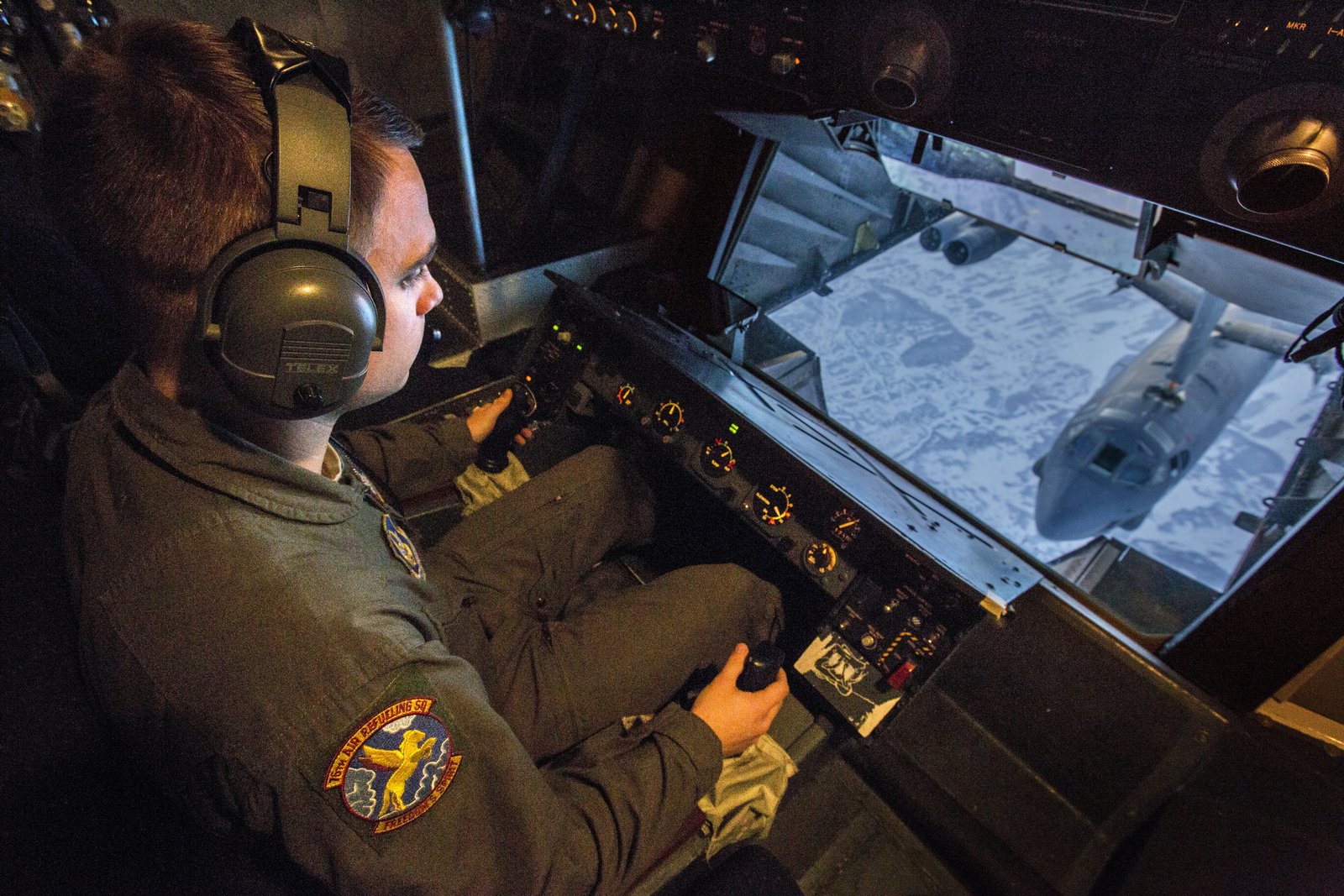 The first aerial tankers were modified World War II-vintage Boeing KB-29/KB-50 Superfortress bombers, identified with a “K” as a tanker. They were followed by the faster and larger KC-97 Stratofreighter.

But in the 1950s, these piston-powered prop planes strained to fly fast enough to safely refuel the newly minted jet fighters and bombers of the day. Fighters could be hanging in the air at low airspeeds while the tanker was at full throttle.

A fast jet-powered tanker was needed quickly, and Boeing’s KC-135 was the solution. Over 800 Stratotankers were delivered to the USAF beginning in 1957, and re-engined, updated and specialized versions of the plane are still in the fleet.

The KC-135’s sister passenger jetliner, the iconic Boeing 707, was modified as a transport/tanker by many air forces, equipped with probe and drogue systems.

In the 1980s, the USAF added the McDonnell Douglas KC-10 Extender to the fleet, a wide-body trijet based on the DC-10 passenger plane. Twin-jet Boeing 767s have also been modified as tankers for other nation’s militaries.

The newest tankers, the Airbus A330 MRTT (Multi Role Tanker Transport) and the Boeing KC-46 (based on the 767) — have been built to meet the requirements of modern air force operations.

Boeing is also working on the MQ-25 Stingray, an aircraft carrier-based unmanned aerial refueling system. The US Navy is planning to have the probe-and-drogue refueling drone integrated into a carrier air wing by 2024.

On the path to a fully autonomous flying boom operations, Airbus recently demonstrated the first fully automatic refueling between an Airbus test A330 MRTT and a Portuguese Air Force F-16 fighter. Intended to reduce the workload of the boom operator and increase safety, the system will begin certification in 2021.

Britain’s RAF VIP Voyager “Vespina” — used by UK government ministers and the royal family — carries out air-to-air refueling missions alongside its VIP role. It recently underwent a Union Jack-themed paint job but is now back in service.

Originally designed for the US Navy, these multi-role aircraft are set up for probe and drogue refueling. The CF-18’s retractable probe sits about seven or eight feet back from the plane’s nose when extended.

“As you approach the basket, the bow wave [of air] from the Hornet actually pushes the basket away from you. You have to try and not stare at the basket. As you approach it, you do it very slowly. When you get a couple of feet back from the basket, you stop and let it stabilize,” explains Baird.

Once contact is made with the drogue, it locks into place, the receiver pilot flies forward to allow the hose reel to retract by 25 feet — and then fuel will start to flow. The pilot can disconnect at any time by reducing power and maneuvering down and away from the drogue.

“On the end of the pod holding the hose reel there’s a set of red, green and orange lights, and when the light goes to green, the fuel is flowing,” says Baird. “Depending on how much fuel you need, you could be on there from anywhere from five to 15 minutes, and you’re burning fuel as you’re refueling.”

On a long multi-“poke” deployment across the Atlantic, Baird might have refueled five to seven times, always making sure that his jet had enough fuel to fly to an airport if there were mechanical problems with the refueling system.

“If you damage your aircraft, or you can’t poke because you’re nervous or in turbulence — well, the stress levels can get really high.”