Concorde at 50: Faster Than A Speeding Bullet 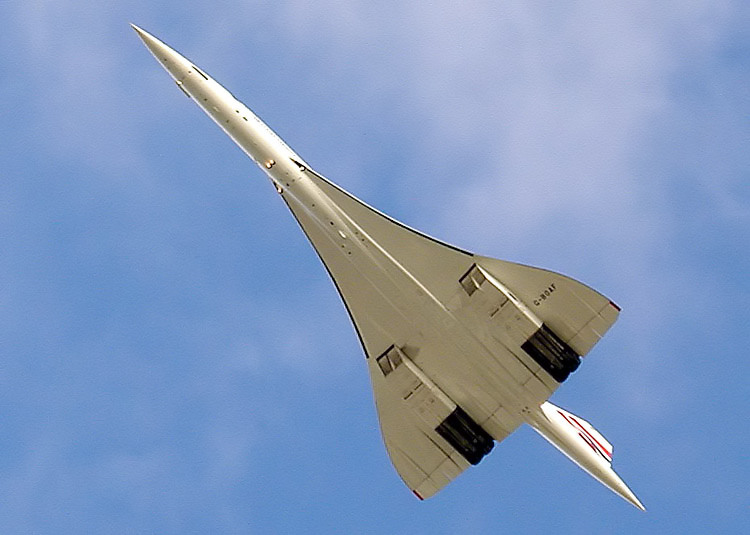 Concorde, which made its first flight 50 years ago on March 2, 1969, was a magnificent creature of the skies, a supersonic transport with roots in the 1950s and 1960s “boom” of aviation innovation.

Developed at the time of slide rules, drafting tables and early computers, the Anglo-French supersonic transport was a technological tour-de-force that operated in airline service from 1976 to 2003, and has never been replaced, although some companies are hoping to fly smaller civilian supersonic jets. 100 passengers were pampered during Air France and British Airways flights at twice the speed of sound, crossing the Atlantic in half the time of subsonic jetliners like the Boeing 747.

But what gave the Mach 2 marvel the ability to fly faster and farther than many military fighter jets?

The Wing’s the Thing

Concorde’s wing is a multi-dimensional curving piece of aeronautical art. Described by engineers as an ogival delta, the slender wing is perfectly clean, without any slats or flaps to boost lift during takeoff and landing.

The SST — from the initials of “super sonic transport” — had the first analog fly-by-wire system developed for a commercial aircraft, two decades before the Airbus A320 made it commonplace in commercial aviation. The system drove six “elevons” — a combination of elevators and ailerons — on the trailing edge of the wing, controlling the airplane’s roll and pitch.

Designed to allow Concorde to cruise at just over Mach 2 at 60,000 feet, the wing also needed good low-speed characteristics so that the SST could take off and land without needing excessively long runways. The odd-looking Handley Page 115 delta-winged jet confirmed to engineers in 1961 that Concorde’s proposed wing would generate strong upper-surface vortices that enhanced low-speed lift. Even so, the wing needed takeoff and landing speeds that were much higher than conventional jetliners: Concorde lifted off usually at around 217 knots, or 250 mph.

Concorde also needed a push to go supersonic, accelerating through the transonic range from about Mach 0.95 up to its initial cruise speed of Mach 1.7.

The solution was what made Concorde brutally loud on takeoff: afterburners! 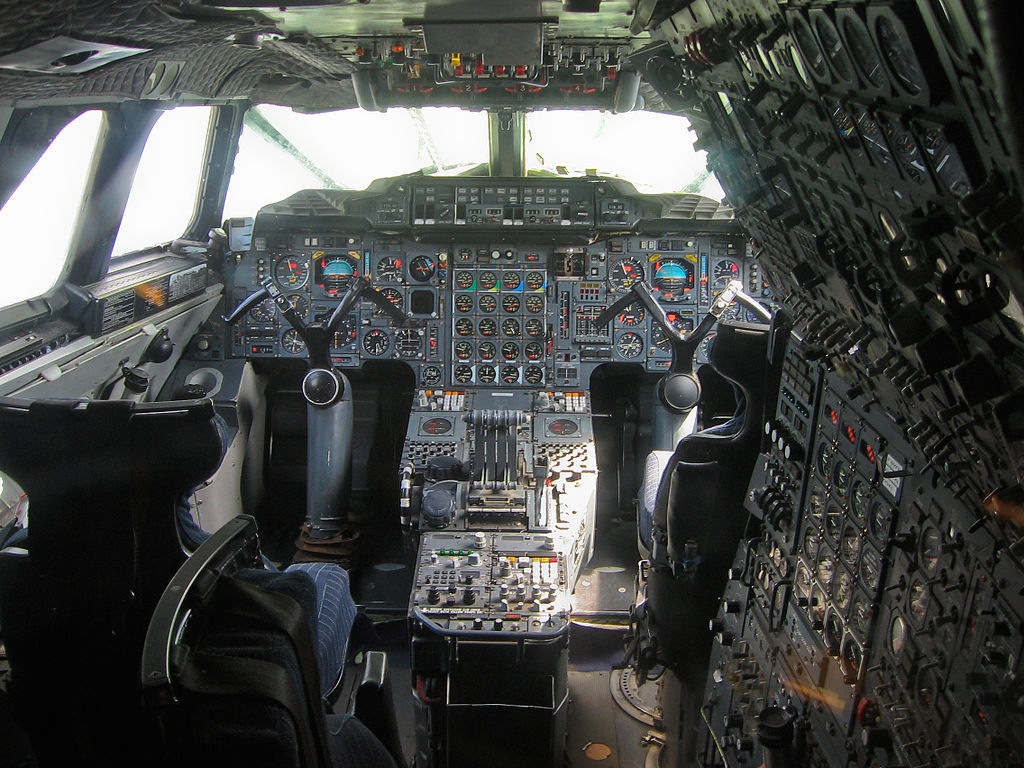 Concorde was the first, and still only, commercial aircraft to be equipped with afterburning engines. Afterburners, called “reheat” by the British, inject raw fuel into the exhaust, creating a characteristic flame. Power was increased by 20 percent, and each one of the four Olympus would provide as much as 38,000 pounds of thrust on takeoff.

On every takeoff, the pilots would count down and activate the afterburners at full throttle. Concorde passengers would feel a strong push into their seats as the SST rocketed down the runway and into the air. On the outside, it looked spectacular.

Reheat was also used to accelerate Concorde through Mach 1, and a complex set of intake ramps and flaps and exhaust nozzles helped stabilize the engines’ airflow at supersonic speeds.

At cruise, the engines provided only half of the thrust, and the other half came from the controlled airflow through the nacelles. At takeoff, with afterburners on, the engines blasted 95% of the needed thrust.

The four Olympus engines launched Concorde into a 20-degree pitch attitude, climbing at 4,000 feet per minute. With that high angle of attack during takeoff, and an 11 degree pitch attitude during approach, the SST’s pilots needed some nifty tech to look outside.

A Nose for Speed

If Concorde had been designed with a fixed nose, its pilots would have had a highly restricted view of taxiways and runways, limited to as little as five degrees of downward visibility.

To solve the problem, the SST’s iconic “drooped nose” lowered by 5 degrees for takeoff; it was raised for subsonic cruise, and a visor came up for supersonic flight to fully streamline the nose. For approach and landing, the visor was retracted, and the nose lowered to 12.5 degrees.

The first two prototype Concordes were fitted with a metal visor that had two small windows. That design restricted outside vision for the pilots and was rejected by the US Federal Aviation Administration.

Fortunately, glass technology was catching up with Concorde’s design specifications, and a laminated, one-and-a-half inch thick, impact-resistant glass visor was installed on the two subsequent pre-production and 14 production aircraft.

The glass on the nose and visor also had to be highly heat-resistant, because the cockpit windows became too hot to touch at Mach 2. 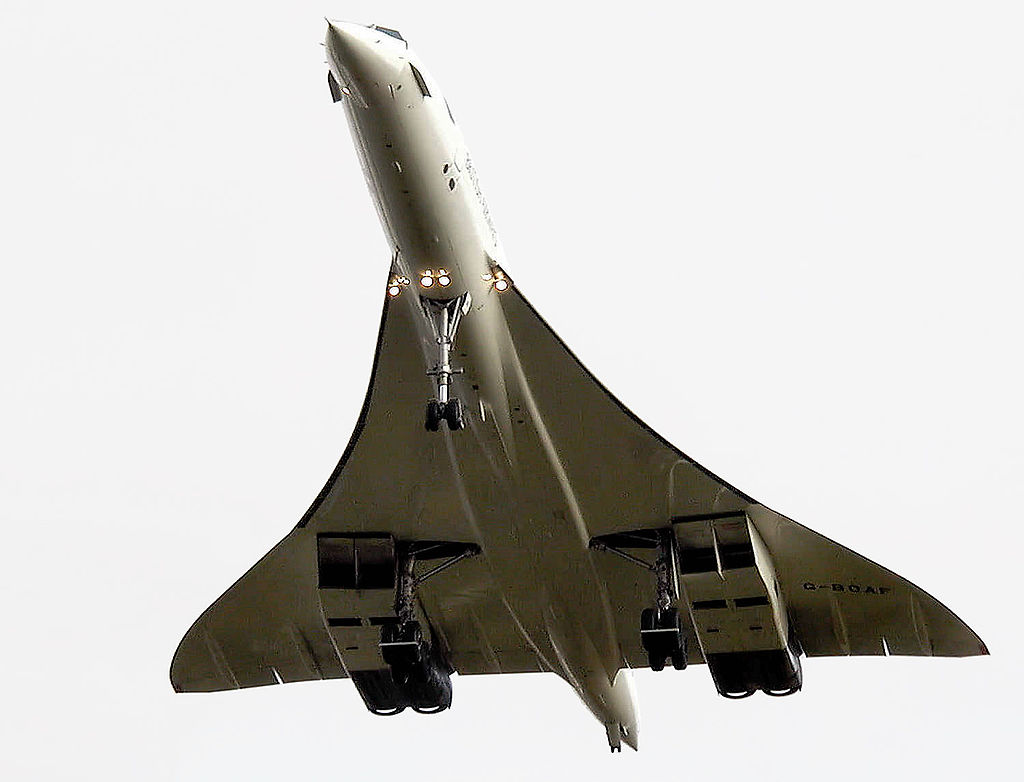 How Hot Is It?

Concorde’s engineers decided that Mach 2.04 would be the SST’s maximum operating speed, driven by the ability of aluminum alloys to easily handle temperatures up to around 130°C (266°F.) Anything faster, and expensive titanium was the only solution for the plane’s construction.

Concorde’s aluminum structure was exposed to two cooling and heating cycles during each climb. Above 37,000 feet, the outside air temperature averages -57°C (-71°F), a significant decrease from the temperature at a departure airport. But as Concorde accelerated to its Mach 2 cruise speed, the airframe was subjected to kinetic heating. The air surrounding the SST was compressed due to the plane’s supersonic speed, and the faster it flew, the more heat was generated.

Due to airframe heating, the entire structure of Concorde stretched by about eight inches during Mach 2 cruise, opening up a space between the flight engineer’s panel and the adjacent bulkhead large enough to stick one’s hand in.

Concorde (Very) Fast Facts
• Concorde’s cabin was small, barely the same diameter as a Bombardier regional jet. It was fitted with recliner seats in a 2-2 configuration — no lie-flats for the short three-hour transatlantic flights.
• The SST had two baggage holds, one in the belly near the leading edge of the wing and the other in the tail behind the cabin, accessed by a right-side door. The rear hold had a “diplomatic locker” that could be sealed, locked, and used for high-value or sensitive cargo.
• On the North Atlantic “party line” radio frequency, Concorde pilots warned the crews of planes about to be overtaken, so that the SST’s sonic boom wouldn’t scare the pilots of the subsonic planes as Concorde rocketed past, 25,000 feet above.
• Up at Concorde’s 60,000-foot cruise altitude, winds were usually lighter than those in the jetstream, miles below. A strong headwind had far less impact on the SST’s flight time.
• Concorde’s cabin windows were very small. The cabin was pressurized to maintain a 6,000-foot cabin altitude while the plane flew at 60,000 feet, requiring more airframe structure, dictating the tiny window size. Airframe and window heating and emergency depressurization requirements also kept the windows small — but what a view!
• To keep Concorde’s center of gravity balanced at supersonic speeds, fuel was transferred between forward and aft tanks.
• Concorde could fly a full automatic landing, with its pilots monitoring the procedure.

Want to find out more? Check out “The Concorde Story” by former Concorde pilot Christopher Orlebar, and have a look at the website here.

Read the original story on The Points Guy.