Coulson’s CU-47 is ready for the fire fight 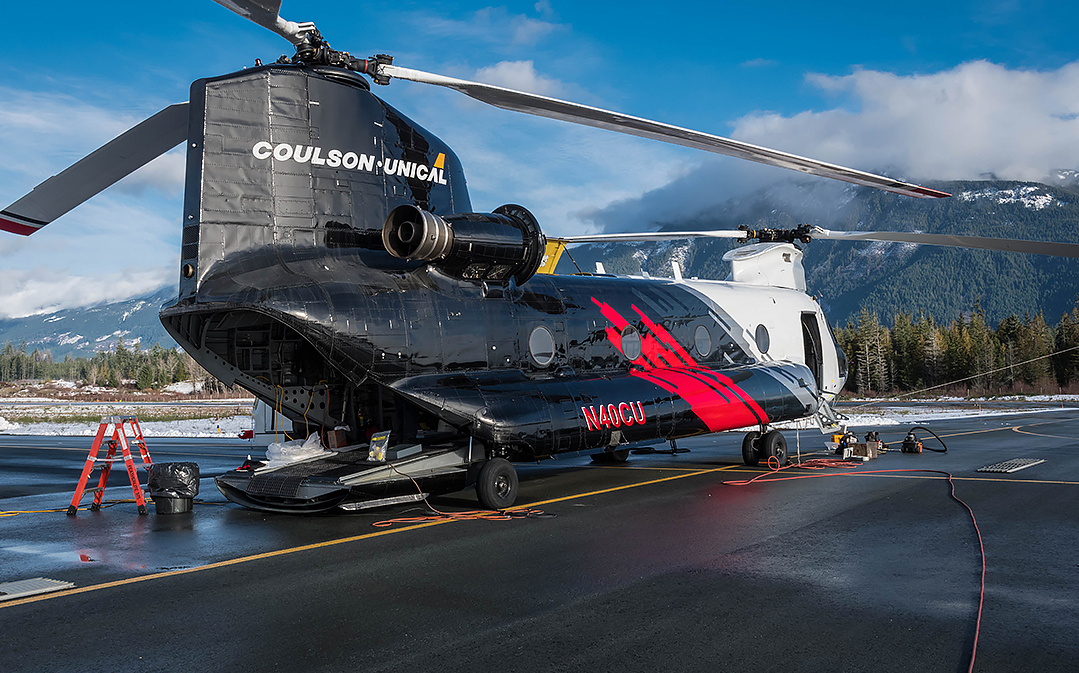 In early March, the first Coulson-Unical CU-47 was flown from the company’s Port Alberni, B.C., base to the Aerial Firefighting North American 2020 conference in Sacramento, Calif.

Featuring a 3,000 gallon roll-on/roll-off internal tank and an advanced Garmin avionics suite, up to 12 CH-47Ds will be converted into next-generation heli-tankers, in a partnership with Unical Aviation that was announced a year ago.

“Unical provides us with the aircraft and a vast supply of parts,” explained Britt Coulson, president and COO, in an interview with Skies.

“They bought the entire Canadian Forces CH-47 parts inventory and were the largest purchaser of CH-47Ds from the U.S. Army.”

The twin-rotor Chinook is well known for its speed, size and payload. While the helicopter is often deployed on fire attack missions carrying a water bucket as an external load, Coulson wanted to give the CU-47 more flexibility and capability.

The company’s engineers had already developed a 4,000 gallon Retardant Aerial Delivery System RADS-XXL for its Lockheed C-130 Hercules tanker conversions, and that tank was shrunk to create a 3,000 gallon RADS-L for the CH-47D conversion.

“It’s the same overall design as the C-130. It shares most of the same hydraulic components, the same doors and the same design of a roll-in, roll-out tank,” said Coulson.

Other CH-47 internal tank systems utilize the small hook well in the centre of the helicopter as the water and retardant delivery port, but according to Coulson, that has its limitations.

“The other tank designs are plagued with flow rate issues, which means they don’t pack enough punch to really get through [forest] canopies or drop in heavy timber – the hook well opening just isn’t big enough.

“The lower the flow rate you have out of your tank, the slower and lower you have to fly. The problem with a big helicopter like a Chinook is if you fly too slow and low, your downwash is going to negatively affect the ground fire conditions and your drop is going to be ineffective.”

To increase and optimize the flow rate for the RADS-L, the belly of the CH-47D was modified by cutting the helicopter’s lower skin and adding structure below the floor to accommodate the tank installation and a pair of drop doors, controlled by the pilots through a state-of-the-art touchscreen controller.

From the same touch panel, the pilots also control the CU-47’s newly-developed retractable snorkel system to refill the RADS-L tank from water sources close to a fire’s location.

Installed internally, the snorkel head sits flush with the belly when retracted, so that with no additional external drag, the helicopter can maintain its fast 140-knot cruise speed.

In a hover, the snorkel takes just four seconds to deploy and six seconds to retract, and the pilots and flight engineer can monitor the system’s operation via a high-definition belly-mounted camera feed, displayed on the touchscreen controller.

“The snorkel system has exceeded our expectations and we’re filling the entire tank in under two minutes,” said Coulson.

With the advanced capabilities of the Garmin avionics, the relocation of the flight engineer’s panel, and the new RADS-L tank, Coulson originally believed that the CU-47 could be crewed solely by two pilots, without a flight engineer. But recent operational experience led the company to rethink that strategy.

“We realized that with a helicopter of this size, going into some of the smaller dip sites, to have an additional set of eyes looking out the side or back is valuable to the pilots. So we’ve de-modified the helicopter and gone back to a full-time flight engineer to provide that increased safety and situational awareness.”

Like Coulson’s C-130 conversions, the CU-47 can also be tasked with night-time firefighting missions, thanks to the Night Vision System (NVS) certification of the helicopter’s avionics suite.

Wearing NVS googles, the CU-47’s crew work in tandem with a fire attack “Intel” helicopter’s pilots. The Intel crew uses a thermal camera to evaluate the behaviour of a fire, and if a drop is required, they take a page from military ground-attack operations. Using a laser, the Intel crew designates the target for the tanker.

“With a geo-referenced lock, the Intel helicopter can orbit, and the laser beam will stay on the same spot. It illuminates an area on the ground about the size of a car,” said Coulson.

The first CU-47 will soon be joined by a second RADS-L equipped helicopter, two CU-47’s with upgraded avionics that will fly “bucket” missions, and a fifth, tank-equipped CU-47 that will deploy as a spare.

“All of our FAA testing [on RADS-L] has finished, we’re just waiting for the final Supplemental Type Certificate signature,” said Coulson. “We’re doing some minor cleanup to the helicopter to make sure that it’s ready to go fight fires this summer.”

Read the original story on Skiesmag.com