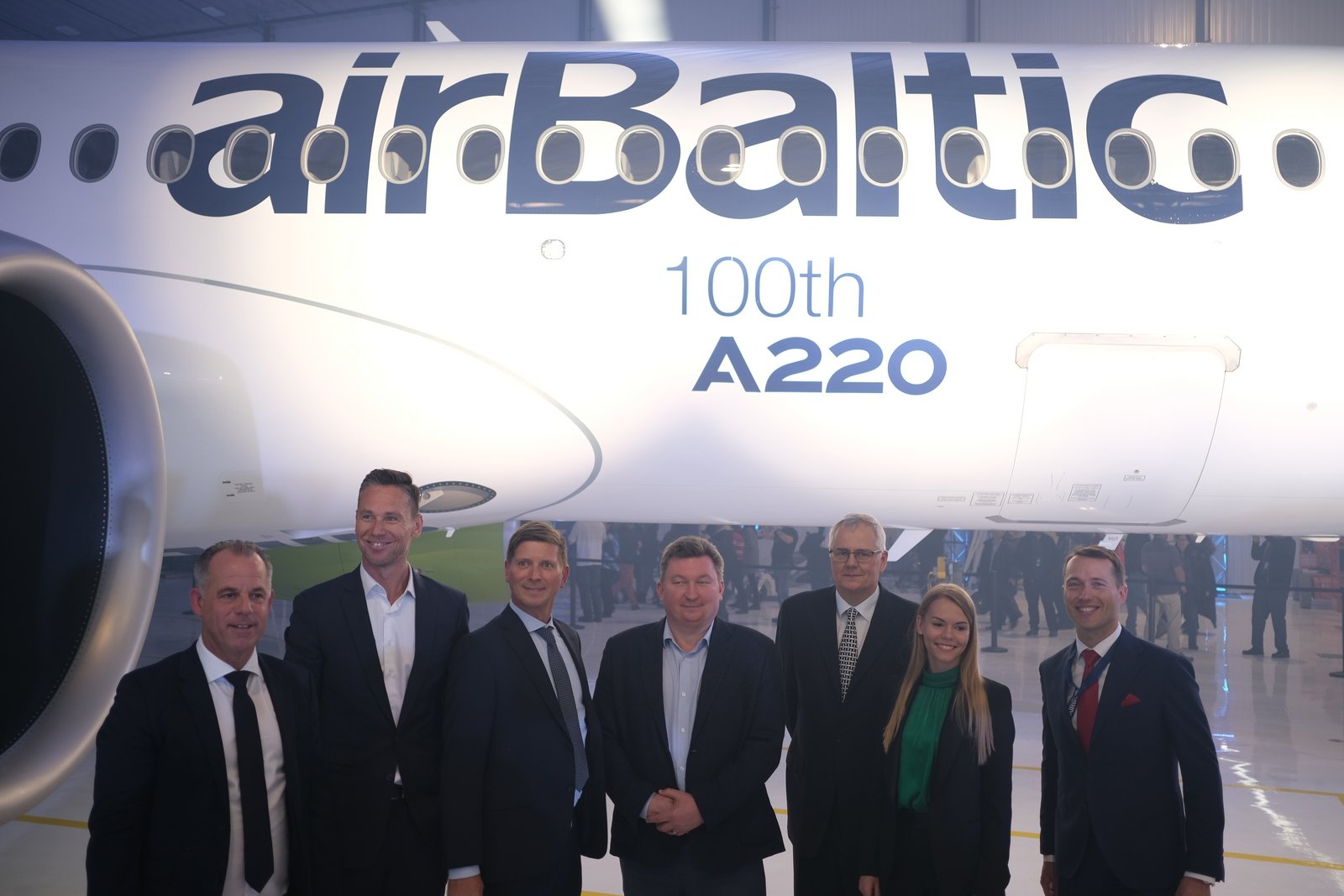 airBaltic executives celebrate the delivery of their 21st A220-300.

Airbus recently celebrated the 100th A220 produced for a customer during a ceremony at the aircraft program’s headquarters in Mirabel, Canada. The aircraft was originally designed and marketed by Bombardier as the CSeries.

Airbus revealed a sparkling airBaltic A220-300 in a new hangar at the airframer’s facility at Montreal-Mirabel Airport last Thursday, marking the delivery of the 100th aircraft produced for a customer since the CSeries program began. The jetliner is the 21st aircraft delivered to airBaltic, the launch customer of what was then the CS300.

“The [A220], from the beginning, has exceeded expectations,” said Martin Gauss, CEO of the Riga, Latvia-based airline. “It has had passenger feedback that no airliner has seen before. People are writing, ‘What an experience it is to fly on that aircraft.’” AirBaltic’s A220s have carried more than 4 million passengers, who get to experience a “wide-body feel in a narrow-body,” Gauss said.

He explained that passengers have been impressed by the plane’s bright cabin, thanks to the A220’s many and large windows. “Then they praise the overhead bins, the washrooms and the size of the aisle.”

This latest addition to the fleet sports a new 149-seat interior and the airline’s revised livery, with airBaltic’s signature green now extending down from the tail to the underside of the fuselage. Special “100th A220” titles are on both sides of the plane, just ahead of the wings.

The green underscores airBaltic’s focus on the environment, according to Gauss. “If we look in Europe at the discussion about sustainability and C02, there is no better aircraft that you can have in that category,” he said. “We have to buy emissions certificates for each [metric ton] of C02, and the certificate prices are going higher and higher. With this aircraft having 20% less C02, it saves the moment you operate the aircraft, not only on the fuel burn, but also on the emissions certificates.”

But the passenger experience of the A220 keeps coming to the forefront for airBaltic. Gauss said that the airline’s customers get upset when they fly on an A220 for one flight, and then have to change to another aircraft type. “Passengers are demanding the A220.”