From buckets to BATTs — the SEI story

Invented and made in Canada by SEI Industries, thousands of Bambi Buckets are used to fight forest fires around the world.
Photo: Mike Reyno | Skies Magazine

In the back of a tree-lined industrial mall a few miles from Vancouver International Airport, a fellow named Jerry is playing with water.

It’s his job to fill a big orange fabric bucket, lift it up into the air on a winch, and then hit a big black button to open a valve in the bottom of the bucket. Water cascades out in a controlled torrent, splashing into an inground pool.

Over and over, he lowers the bucket down into the pool, refills it, winches it back up, and hits the button until he’s satisfied with the bucket’s performance.

Jerry works for SEI Industries and he’s testing a Bambi Bucket, the indispensable aerial firefighting tool invented and made in Canada.

“Thousands and thousands have been sold,” said Sergio Fukamati, director of SEI’s firefighting division, in a recent interview with Skies. “Our standard Bambi Bucket with a single drop valve is still the most popular one, but the Bambi MAX with its multi-drop valve is becoming the industry standard.”

The flexible buckets are sized to match the lifting capability of virtually every helicopter type. Capacities range from a small 270-litre Bambi to the huge 9,800-litre bucket that’s carried by heavy-lift helicopters like the Boeing Chinook or Russian Mil machines.

The Bambi Bucket was invented by Don Arney in 1978, and the first model was delivered in 1982. Since then, the bucket has undergone continuous improvement, reflecting new technologies in manufacturing and materials.

The latest version is the new i-MAX, currently in testing and scheduled to be commercially available later next year.

“This is a Bambi that incorporates a load cell in the control head of the bucket where it hooks to the helicopter,” explained Fukamati. “It integrates with a touch screen control in the cabin, where a pilot can punch in a specific load, and the bucket adjusts.”

Like other MAX buckets, this smart Bambi can be programmed to drop varying amounts of water over several drops.

Bambi Buckets can also be equipped with a snorkel system to suck water out of an available source with a depth as little as 18 inches.

Every new Bambi Bucket is tested at SEI’s Delta, BC manufacturing facility.

This kind of product evolution is at the heart of SEI’s mission – after all, the company’s name stands for “Science, Engineering and Innovation.” The company has a team of 87 people working in its Delta, B.C., facility.

“We have a very high engineering to salesperson ratio. There’s one engineer for every salesperson, which is very unique,” said Paul Reichard, director of SEI’s remote site division. “That gives us a lot of engineering bench strength. When customers come to us with a problem, we can do it from beginning to end and we can do it quickly.”

SEI’s focus on engineering expertise and nimble innovation has led the company to develop a wide range of products.

Leveraging its knowledge of fabric materials and welding technologies, SEI has been manufacturing fuel bladders since the mid-1990s.

With more than 45 unique products spanning a variety of climatic conditions and bladder capacities, SEI’s remote site products are in service with more than 50 military forces and commercial companies worldwide.

The crossover between military requirements and commercial opportunities has created an interesting path for SEI’s product development.

According to Reichard, the need to position water close to a forest fire for Bambi Bucket operations led to the “dip tank” – think of a flexible, portable above-ground swimming pool.

The Canadian military saw the product and asked if it could be used as a drinking water supply for remote locations. So SEI reworked the dip tank, put a cover on it, and the “onion tank” was born.

To move the fluids in and out of bladders and tanks, SEI created a range of pumping systems. Most recently, the company developed a containerized system for Japan’s military that will be pre-positioned for quick emergency response.

Then one day, a call came in from the Columbian military, a customer using SEI’s bladder and pumping systems. The military was trying to solve its logistical problems with ground deliveries of fuel – their trucks were being hijacked or stolen.

“They took the smallest bladder tank we made – which is 5,000 gallons – put it in a DC-3 and asked us to come down to Columbia to show us what they did,” explained Reichard.

“The idea worked, and they had strapping systems to try and hold the thing down. But it was moving around, the straps were abrading, and it was leaking fuel in the aircraft.

“I was sitting there thinking, ‘This looks so dangerous,’ and they asked, ‘Well, can you make it safer for us?’”

Yes, SEI could. And did. 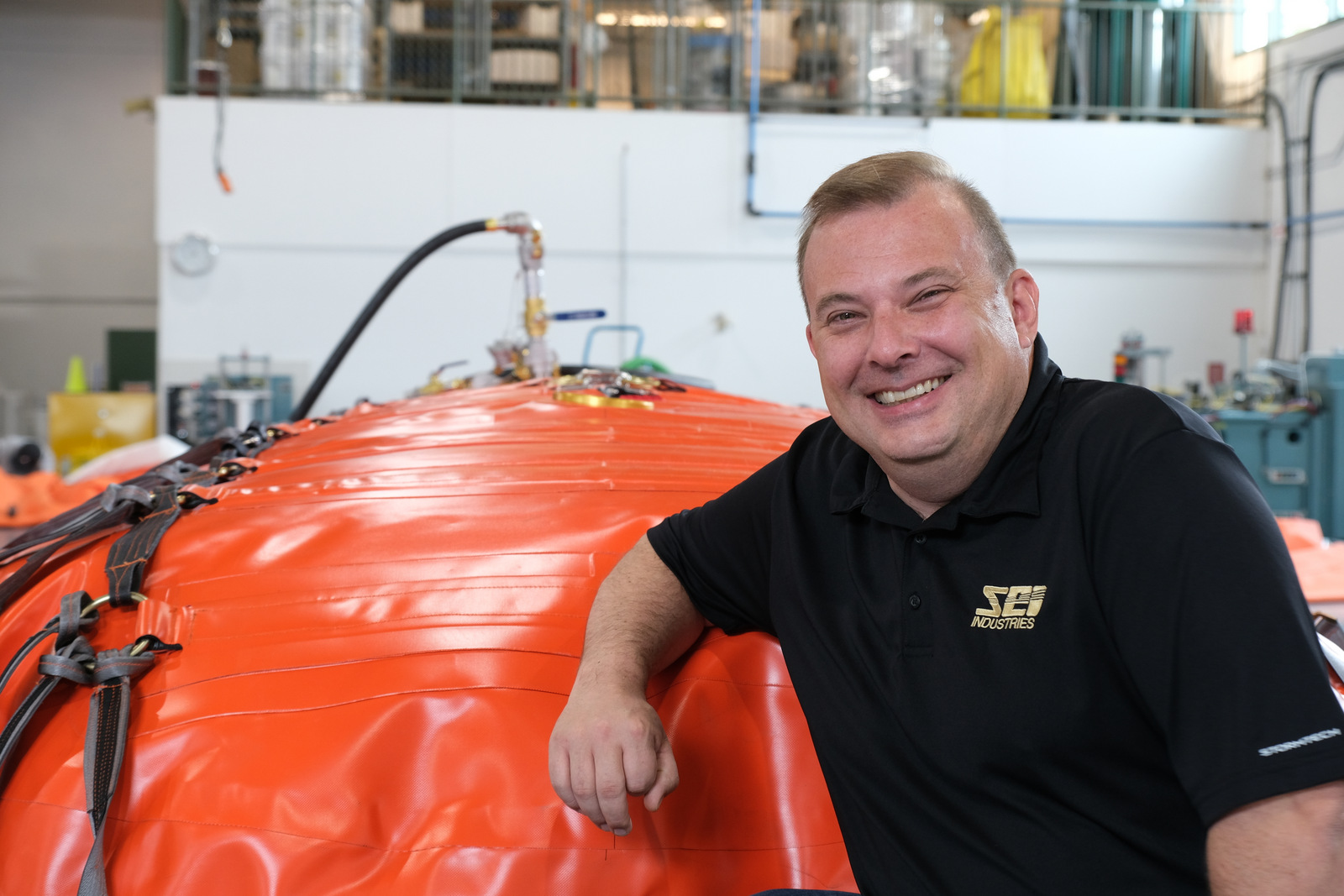 Designed specifically for the safe and efficient air transport of fuels, SEI’s Bulk Aviation Transport Tank – or BATT – is a tank within a tank.

The inner fuel resistant tank can store diesel, jet fuel or gasoline – or in the case of SEI’s new Multi-fuel BATT, all three. To prevent the fuel from sloshing around in flight, the tank has a system of baffles – one version for airplane BATTs and one for helicopters, reflecting the differing in-flight dynamics.

The outer tank is also fuel resistant, and the flexible material has the strength to handle the stresses of transport, as well as being abrasion and puncture resistant.

The two tanks are connected at the ends with flanges and internal side straps, and the external tank has an integrated harness system to secure the BATT inside the aircraft.

Working with its suppliers, SEI specifies the properties of the materials it uses to make its products. After cutting the components, radio-frequency fabric welding creates a joint that’s equal in tensile strength to the base level’s properties. It’s so strong, it’s as if there isn’t a weld.

The first BATT was delivered to the Columbian military in 2009. By 2012, the tanks were being sold to commercial operators in Canada.

The smallest BATTs can be transported in a de Havilland Otter or a Cessna Caravan. The biggest BATT holds 9,500 litres of fuel, sized for large cargo planes serving mining, resource, military or other remote facilities, for example. Aircraft such as the Boeing 737 or Lockheed Martin C-130 Hercules can carry two BATT tanks at once.

When a BATT is emptied, it can be rolled up to a fraction of its filled size.

In Canada’s North “a BATT tank and a ground bladder are a very efficient model for a small exploration site,” said Reichard.

“Compared to fuel drums, these systems are a lot less likely to have fuel spills and to cause injuries because they’re not handled as much. From an environmental perspective, it’s a cleaner site.”

When a wildfire team must fight fire with fire, SEI’s Dragon Egg ignition spheres can be used to create a controlled burn. Safer than using open torches, crews spread Dragon Eggs over the burn area. Smaller than a ping-pong ball, the timing of each Egg’s ignition is carefully controlled by the last-minute injection of a triggering chemical.

“Our owner has always been very active in the naming process; he wants us to keep a light heart in it, but also look for uniqueness,” said Reichard.

So, how did the Bambi Bucket get its name?

Some believe that the iconic orange water bucket was named after the famous animated deer. Others think that it honours a waitress named Bambi who worked in a pub in Boise, Idaho, where forest firefighters hung out.

“Neither is true, and it’s not a sexy story,” admitted Fukamati. He explained that in 1978, a marketer asked SEI founder Don Arney about a name for his soon-to-be industry-changing invention.

“Don had to come up with a name, and just out of the air he said, ‘We’ll call it the Bambi Bucket.’ Don was just joking, but his friend said, ‘It sounds good – it’s a great name!’”

That’s SEI’s story, and they’re sticking to it!

Read the original story at Skiesmag.com