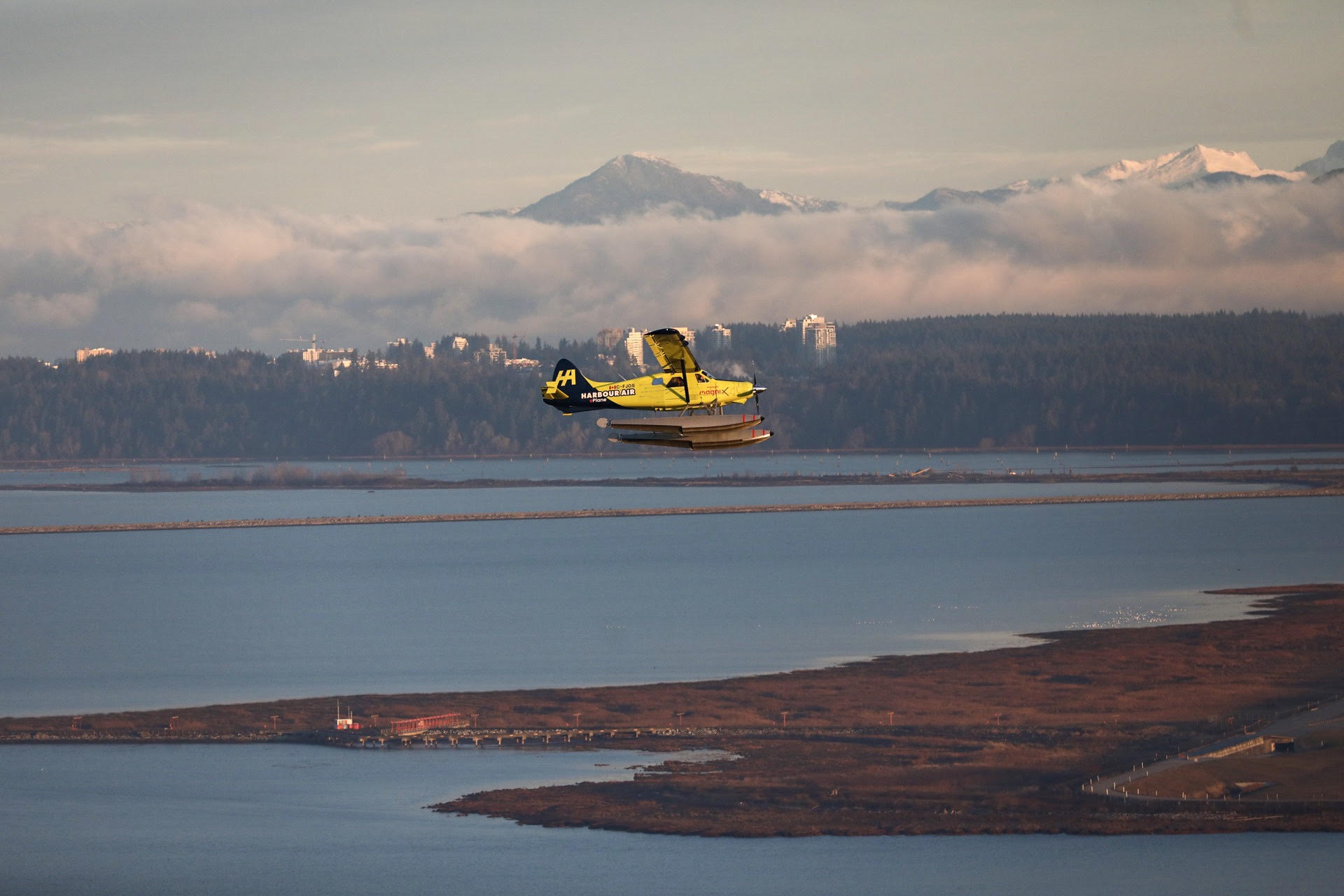 On Dec. 10, 2019, aviation history was made in Canada as the world’s first electrically-powered commercial passenger aircraft flew at Vancouver International Airport (YVR).

In a marriage of old and new technology, a 63-year-old de Havilland Canada DHC-2 Beaver floatplane, powered by an advanced magniX electric propulsion system, lifted off from the airport’s floatplane terminal for its first test flight on a mostly-cloudy West Coast morning.

At the controls of the modified Harbour Air plane was Greg McDougall, an 8,000-hour Beaver pilot and the airline’s CEO and founder.

Instead of a Pratt & Whitney radial piston engine or a P&W Canada PT6 turbine, the “ePlane” was powered by a magni500 electric motor capable of generating as much as 560 kilowatts, or 750 horsepower. To match the power of a stock, piston Beaver, the propulsion system was de-rated to the electric equivalent of 450 HP.

As McDougall pulled the plane “onto the step” and flew off for a short, four-minute test flight, the plane’s four-bladed Hartzell composite propeller generated all of the remarkably quiet takeoff sound – a fraction of the thunder from the legacy Beaver’s radial piston.

“I didn’t have time to really do too much experimenting with different flight configurations. We were limited by the weather,” explained McDougall in an interview with Skies.

Although the battery-powered ePlane was at its 5,600-pound maximum gross weight, McDougall was surprised by the performance of the electric propulsion system’s instant torque. With a large group of international media watching and a helicopter camera ship following, he had planned to lift off at a specific target to make sure everyone had the perfect “photo op.”

“But I had to throttle it back on takeoff because the plane lifted off a lot quicker, even with the eight or nine knot tailwind blowing.”

As a technology demonstrator, the ePlane won’t be carrying passengers – there isn’t room for seats in a cabin that’s filled with lithium-ion batteries – and it will only have a 15-minute endurance with a 25-minute reserve.

“Those are batteries that NASA is using, but they’re not batteries that we’d use if we were going to try and make it economical to fly today, because they’re very low in watt-hours per kilogram,” said McDougall.

The energy density – the power to weight ratio – of today’s batteries is a key factor for aircraft electrification, as is the shape and size of each unit. While there may be other battery solutions with higher energy density and a smaller form factor, Harbour Air and magniX are being cautious.

“They are batteries that have been to space,” said McDougall. “So, if you’re choosing a battery for a prototype, then that’s the one you choose.”

He explained that as novel as it is, the electric powerplant certification is not unlike the process needed to gain approval for a new engine, such as the Beaver’s conversion from a piston to a turbine.

“The Beaver is the platform where we can get the Transport Canada regulatory process started, because the pathway to certification at this point doesn’t exist. It has to be pioneered,” said McDougall.

“All we should have to demonstrate is that the electric propulsion system is as safe or better than the technology we’re currently using. We don’t feel that’s hard to do, but it’s new and it hasn’t been done before,” he added.

While the ePlane continues its flight tests, the first phase of the approval process will take place in the U.S., where magniX will certify the components of the electric propulsion system under Federal Aviation Administration (FAA) regulations.

Once that’s complete, phase two will see the certification of Harbour Air’s installation, with the support of Transport Canada.

“The Government of Canada believes that the electrification of transportation is a key part of Canada’s transition to a low-carbon economy,” said a spokesperson in an email to Skies.

“The Canadian Aviation Regulations allow the department to certify novel or unusual designs such as electric propulsion aircraft, through the development of special conditions-airworthiness, as required.”

After a review of the electric propulsion system, Transport Canada authorized the ePlane’s first test flight, and the department “will support the design certification initiative once the company is ready to enter that phase of the project.”

McDougall said that Harbour Air has briefed the Minister of Transport’s office, and that the ePlane has received “a tremendous amount of attention from the [British Columbia] provincial government.”

Once certified, Harbour Air will hold the worldwide supplementary type certificate (STC) for the Beaver conversion and will look to extending the technology to the rest of its fleet.

Remarkably, it’s only taken magniX two years to take the magni500 from an idea to an engine flying in a commercial aircraft.

“It’s amazing what you can do when you take talented, passionate people and say, ‘You have no constraints to your thinking,’” said Roei Ganzarski, CEO of magniX. “Of course, we didn’t invent the electric motor, but we innovated an existing technology and made it aerospace-worthy.”

The “magni-fied” electric Beaver performed better during its first flight than ground testing had suggested, according to Ganzarski.

“We were pleasantly surprised that the propulsion system used less power from the batteries than we anticipated. Even when you test things on the ground, it’s academic in nature until you actually fly.”

With headquarters in Seattle, Wash., and engineering centres in Seattle and on Australia’s Gold Coast, magniX is developing motors generating 375, 750 and 1,500 horsepower.

The magniX system is “power agnostic” – the source of the electrons doesn’t matter to the motors. Electricity for future aviation solutions could come from batteries, hydrogen fuel cells, or a fuel-powered generator.

MagniX’s next prototype aircraft, a magni500-powered Cessna Grand Caravan, is targeted to fly in the first quarter of 2020. As a pure test aircraft, the Cessna is dedicated to wring out the propulsion system in the air, at its full 560 kilowatt/750-horsepower rating.

And then there’s Eviation’s Alice – a clean-sheet, nine-passenger, all-electric aircraft that’s been designed around the capabilities of an electric propulsion system.

Alice is a futuristic-looking tri-motor, with a propulsor at the tip of each high-aspect-ratio wing and a pusher-prop in the fuselage under a high V-tail. Elegantly curved, the sleek Alice looks fast just sitting on its main and tail landing gear. The fly-by-wire, all composite aircraft will cruise at 240 knots, with a 650-mile range.

The first Alice is undergoing initial systems integration and taxi testing in Prescott, Ariz., and Ganzarski hopes the plane will begin flight testing this summer in Moses Lake, Wash.

“What Eviation has been able to do with the Alice is truly optimize the aircraft to be electric – for example, how many batteries, and where you put them in the aircraft. As you can imagine, building a brand new aircraft has added a level of complexity versus magni-fying one.”

The electric Beaver, Grand Caravan, and Alice are just three electrically-powered planes either in development or already flying.

Hawthorne, Calif.-based Ampaire has replaced the rear engine of a six-seat Cessna Skymaster with an electric motor, creating a hybrid-propulsion system that retains the plane’s forward piston engine. In partnership with Hawaii-based Mokulele Airlines, an Ampaire 337 will begin a series of test flights this fall between Maui’s Kahului and Hana airports.

In France, VoltAero is developing the Cassio, a four- to six-seat hybrid aircraft based on the design of the Cessna Skymaster, but with a hybrid electric/piston engine at the rear of the fuselage and an electric motor mounted at the front of each boom.

And the team composed of Airbus, Rolls-Royce and Siemens are working on the E-Fan X hybrid demonstrator. Using a BAe-146 testbed, the ambitious project will replace one of the quad-jet’s turbofans with a two megawatt electric motor, with power supplied by batteries and a turbo-generator mounted in the fuselage.

The next few years will see new electric designs emerge from hangars around the world – planes that may change the current airline business model.

“Over the next five to 10 years, six- to 19-passenger aircraft with up to about 1,000 miles of range is the sweet spot for growth, not only for electric aircraft but for a new electric transportation business model,” commented Ganzarski.

He believes that the reduced operating costs and infrastructure requirements of electric aircraft could bring airline service back to local airports. Just as it was in the post-Second World War days of Douglas DC-3 feeder services, electric planes could re-connect small communities through a network of short hops, with flight durations already suited to the capabilities of current battery technology.

“My children are teenagers now, and the most exciting thing to me is that eventually, their children will only fly in electric planes in distances of up to a thousand miles, and they will look back in horror at how we once flew these distances with gas-guzzling, emission-creating airplanes.”

While the electric Beaver is flying its short test hops on the path to certifying its electric powerplant, McDougall’s focus is on the electrification of Harbour Air’s workhorse, the single-turbine DHC-3T Otter.

“The magniX propulsion system is completely transferrable into the single Otter, and we’ll put batteries into the belly area where the fuel tanks are,” said McDougall. “The motor will work. We love it – 750 horsepower. It replaces a PT6 in an absolutely brilliant way, and you get instant torque out of it. With a PT6 you have to wait until it spools up.”

From its bases in Vancouver Harbour and at the floatplane terminal at YVR, Harbour Air serves 12 destinations on the B.C. coast with its fleet of over 40 aircraft. Most of its flights are a half-hour or less – ideally suited to the capabilities of today’s battery technology.

“We’re sitting in a very unique space that enables us to take advantage of something that other airlines just wouldn’t even be able to consider,” he said.

McDougall expects that the magniX installation in the Otters will give the planes at least 30 minutes of flying time. Harbour Air operates its flights under Visual Flight Rules (VFR) regulations, which will require an additional 30-minute battery reserve.

It’ll be a while until the operational procedures and infrastructure requirements are worked out, but McDougall has been told by the propulsion system’s engineering team that recharging will be “a minute for a minute. Half an hour flight, half an hour recharge. Don’t forget you’re not charging the full battery, you still have the 30-minute reserve in the battery, so you’re going to be recharging from half.

As someone who is both an enthusiastic supporter of the electrification of transportation and an early adopter of the technology – he had one of the first Tesla electric cars in Vancouver – McDougall is hopeful his airline will be flying electric planes sooner than later.

“I would hope to see an Otter in the air with paying passengers on it within two to three years, but I’m always optimistic. There’s no reason why it can’t happen. From where the technology is today, where it needs to go is not that far away.”

“I think it’s really important for Canada to lead the world on this. We’ve always been very innovative in the aerospace sector and we have the opportunity. I’ll be pushing very hard for this to happen.”

Read the the original story in the online issue of Skies Magazine.