High flyers: The OEMs’ perspectives on the VIP market 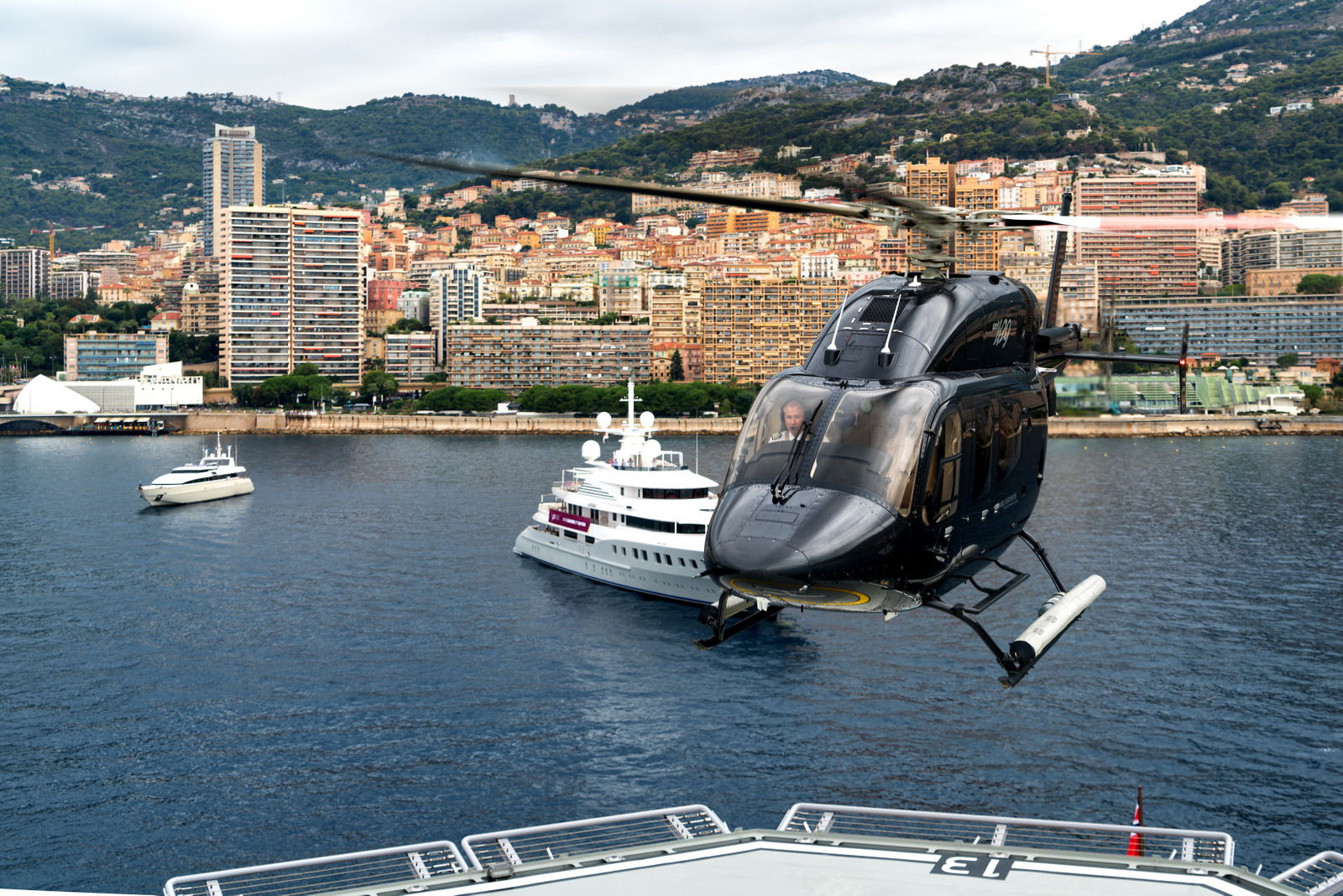 A VIP Bell 429 touches down on a yacht in Monaco. Photo: Bell

It’s early evening at a major metropolitan airport as an elegant corporate jet rolls up to its home base hangar, at the end of another globe-spanning flight. Moments after the engines spool down, the airstair door opens and the plane’s owner, who could be described as having an “ultra-high net worth,” walks quickly down the stairs and across the ramp.

Waiting there, with engines running and rotor brake engaged, is a helicopter decked out in the same unique livery as the jet. The owner settles into her seat in the machine’s sumptuous interior, the rotor spins up, and the helicopter lifts off into the twilight, heading home to the private helipad at her rural estate.

VIP helicopters like this machine continue to make up a significant percentage of the industry’s sales and operations. Airbus, Bell, Leonardo and Sikorsky all recognize the importance of their VIP — and VVIP — customers, some of whom are long-term owners.

To find out more about the rarefied air of the VIP market, Vertical talked to the four major manufacturers.

With a heritage dating back over 40 years to the delivery of the first Agusta 109, Leonardo has over 830 VIP helicopters flying around the world, and delivers a new VIP machine at an average of one every 10 days.

It’s no surprise, then, that the 70-year-old aerospace company is upbeat about the market.

“The VIP helicopter market overall is doing well,” said Manuela Barbarossa, Leonardo’s head of VVIP/corporate. “It is experiencing a period of growth compared to the last three to five years, which were slower. The signs around the market are positive. We are seeing an increase in ultra-high net worth people seeking out the advantages of helicopter travel.”

Leonardo’s customers can choose VIP helicopters from the skid-equipped AW109 Trekker right up to the super medium AW189. But the company’s most popular VIP machine is the AW109 GrandNew, the latest in the long line of twin-engine speedsters.

“It’s nearly iconic; people seek out the shape,” said Barbarossa. “It is stylish and very safe because all systems are redundant in its light twin category, and it features advanced avionics and navigation systems.” She said that the GrandNew is popular in Europe, well-suited to the continent’s geography. 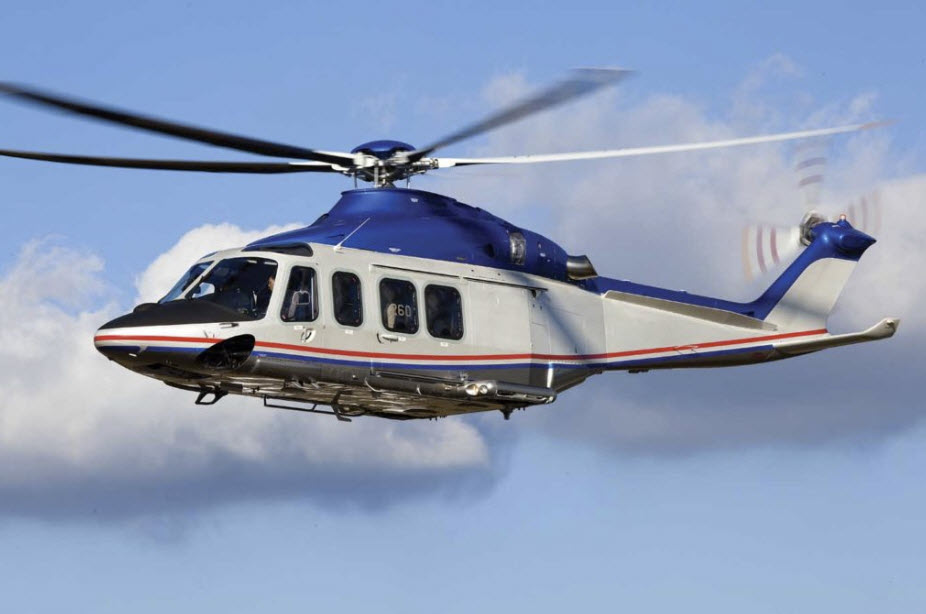 Leonardo recently delivered its 1,000th AW139. The type is leading the company’s growth in Asia in the VIP/corporate sector.
Photo: Leonardo

Asia is a growing market for Leonardo, with the AW139 leading the charge for both personal and corporate VIP travel. With effective cabin soundproofing, passengers traveling in an AW139 — and in its big brother, the AW189 — can have a conversation without wearing a headset, according to Barbarossa.

Depending on the level of customization, it can take between three and six months for Leonardo to complete a VIP machine. And the company brings its style to bear on every project.

“Leonardo offers customers an incredible range of luxury interior options,” said Barbarossa. “We have our own interior center with hundreds of swatches of paint, carpet, fabrics, leathers — almost anything you could think of. Most clients prefer to have us handle completions because we have a talented team of designers who treat every aircraft interior like a work of art.”

With a VIP helicopter market made up of 60 percent private owners, 30 percent operators and 10 percent governments, Leonardo is excited about the prospects of the world’s first commercial tiltrotor, the AW609.

“It combines the flexibility of a helicopter with the comfort and speed of a fixed-wing airplane,” said Barbarossa. “We think it will have a big impact on the VIP market.”

Earlier this year, when Audrey Brady was promoted to vice president of Sikorsky’s commercial systems and services, she already had a clear impression of the VIP helicopter market, thanks to her experience running the company’s completion center in Coatesville, Pennsylvania.

But that wasn’t enough for Brady.

“In order for me to get to know the customers a lot better, I wanted to be able to talk about the product on a whole different level,” she said. So Brady started training for her private license in a Schweizer 300, which she describes as “the greatest training helicopter in the world.”

Now, as a licensed helicopter pilot, Brady has flown the full series of S-76 machines. It’s no surprise that her favorite is “the S-76D, for sure.”

“I can talk about the differences, especially for VIP customers who are loyal Sikorsky customers,” she said. “If they ask, ‘why upgrade now?’ I can actually speak from experience.”

Over the past 40 years, 20 percent of all S-76 deliveries have been to VIP customers — a total of over 180 helicopters. In the niche VVIP market, Sikorsky’s S-92 is outpacing the S-76, with the larger helicopter having been selected to transport 12 heads of state, including the President of the United States. 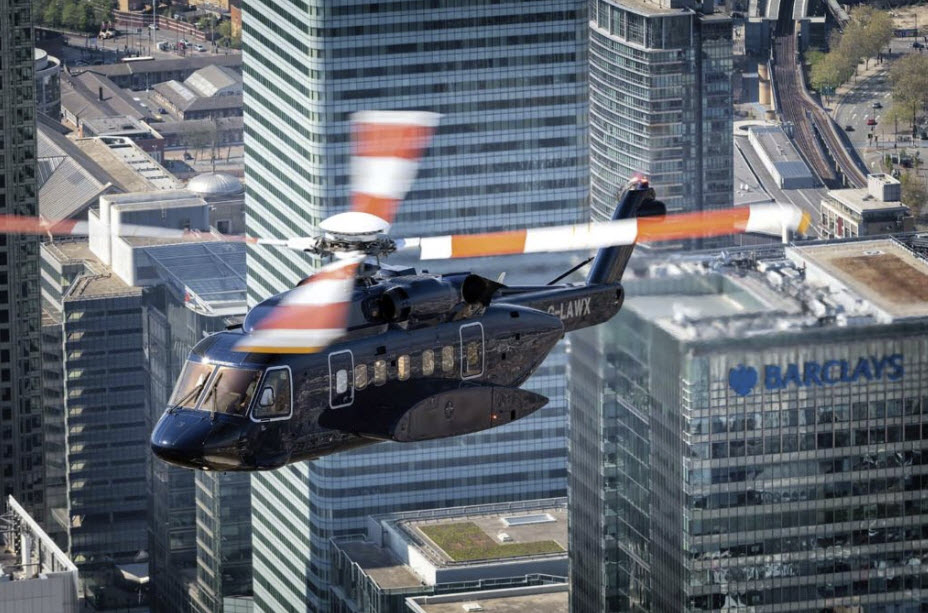 The S-92 has outpaced the S-76 in terms of VVIP sales, and is used to transport 12 heads of state.
Photo: Lloyd Horgan | Vertical Magazine

While Brady acknowledges that the S-92 is “a lot of machine for the corporate market, we’ve seen additional interest as of late. It has more range and it carries more passengers.”

With a cabin height that allows passengers to stand up, the S-92 can be outfitted with a lavatory and showers, which can extend the completion time for the machine to two years.

“Sikorsky has the reputation of customizing the aircraft however the customer desires,” said Brady. The company can complete a machine for a VIP customer, or the client can work with an outside company.

VIP customers can have very unique requests that require special development. “A lot of times we will engineer a solution and we can work with completion vendors,” said Brady. “We’ve also worked with very high-end interior decorators.”

Brady gave the example of an S-92 client who sought out a custom-designed cup holder.

“You have to think about not only the design, but you have to look at what’s necessary to certify it,” she said. “It has to be crashworthy – it’s about more than making sure you don’t spill the drink!”

And although VIP helicopter missions are relatively short, clients are beginning to look for in-flight entertainment connectivity systems (IFEC), to provide Wi-Fi internet access in the air.

“Our in-flight connectivity options available today are focused on offshore communication and connectivity mainly based on satellite,” said Brady. “We are working with suppliers to develop 4G LTE and 5G connectivity solutions that have the speed and economics suitable for the VIP market.”

According to Brady, Sikorsky is flying more demos of its VIP helicopters. “We’re definitely starting to see more interest now. But we know that it really is cyclical, especially with the economy.”

The Bell 407’s basic design stretches back more than 50 years to the first Bell 206 JetRanger. Although it’s primarily thought of as a utility machine, many of the four-blade, single-engine helicopters have been completed as VIP transports.

Equally at home on a rooftop helipad or the aft deck of a luxury yacht, the twin-engine Bell 429 can be equipped with skids or retractable gear. Customers can also choose to configure their new machine with a high-end VIP interior from Italy’s Mecaer Aviation Group (MAG).

And while some may look at the Bell 505 as a low-cost entry-level machine, both owner-pilots and operators see the VIP opportunity in Bell’s newest helicopter.

“A very high percentage of our Bell 505 orders have been in the corporate/VIP segment,” said Griffin.

Bell’s VIP orders for the 505, along with the 407 and 429, come primarily from private operators. Overall, more than 2,160 VIP Bell helicopters have been delivered, mostly to North American and Latin American operators, followed by those in Europe and Asia Pacific.

VIP machines can be completed at Bell’s facility in Piney Flats, Tennessee, or at a shop of the client’s choice. In addition to the MAG interior options for the 505 and 429, Bell can install its standard corporate interior, or create a personalized design.

“We offer various seating configurations, an assortment of leathers for seats and upholsteries, pedestals for storage, ambiance lighting and unique designs that can be customized to anyone’s liking,” said Griffin.

Up front, Bell continues to improve the capabilities of its helicopters, bringing additional safety features to pilots. The company recently announced IFR certification for the 407 along with a new autopilot for the 505.

With the certification of the super-medium Bell 525 Relentless expected soon, the company will have a new entry in the VIP market. With a large cabin big enough to seat up to 20 passengers in a high-density configuration, one can only imagine the interiors being considered by the future VIP owners of the advanced fly-by-wire helicopter.

“The Bell 525 will be a gamechanger in the VIP/corporate transport segment once it enters the market,” said Griffin.

Airbus Corporate Helicopters (ACH) was created in 2017 to address the overall decline the company was seeing in the personal and business aircraft sector.

Despite not seeing the slight recovery in the global market that he expected the industry to experience this year, Frederic Lemos, head of ACH, remains upbeat about the restructuring decision.

“Airbus held the leading market share for decades, but we felt the need to reinvent our approach to this specific clientele,” said Lemos. “We wanted to bring them the ultimate in helicopter experience, not only in flying the product but at every stage of the customer experience path. So far we have seen very positive results from ACH and we have increased our market share.”

The creation of ACH mirrors the move by Airbus Commercial Aircraft to split off Airbus Corporate Jets. With the two VIP divisions, Airbus is the only OEM to manufacture and distribute both fixed-wing corporate aircraft and helicopters.

Two-year-old ACH has completed its first helicopter deals in Russia, South East Asia and Australasia, while most sales are still driven by the core markets of Europe and North America. 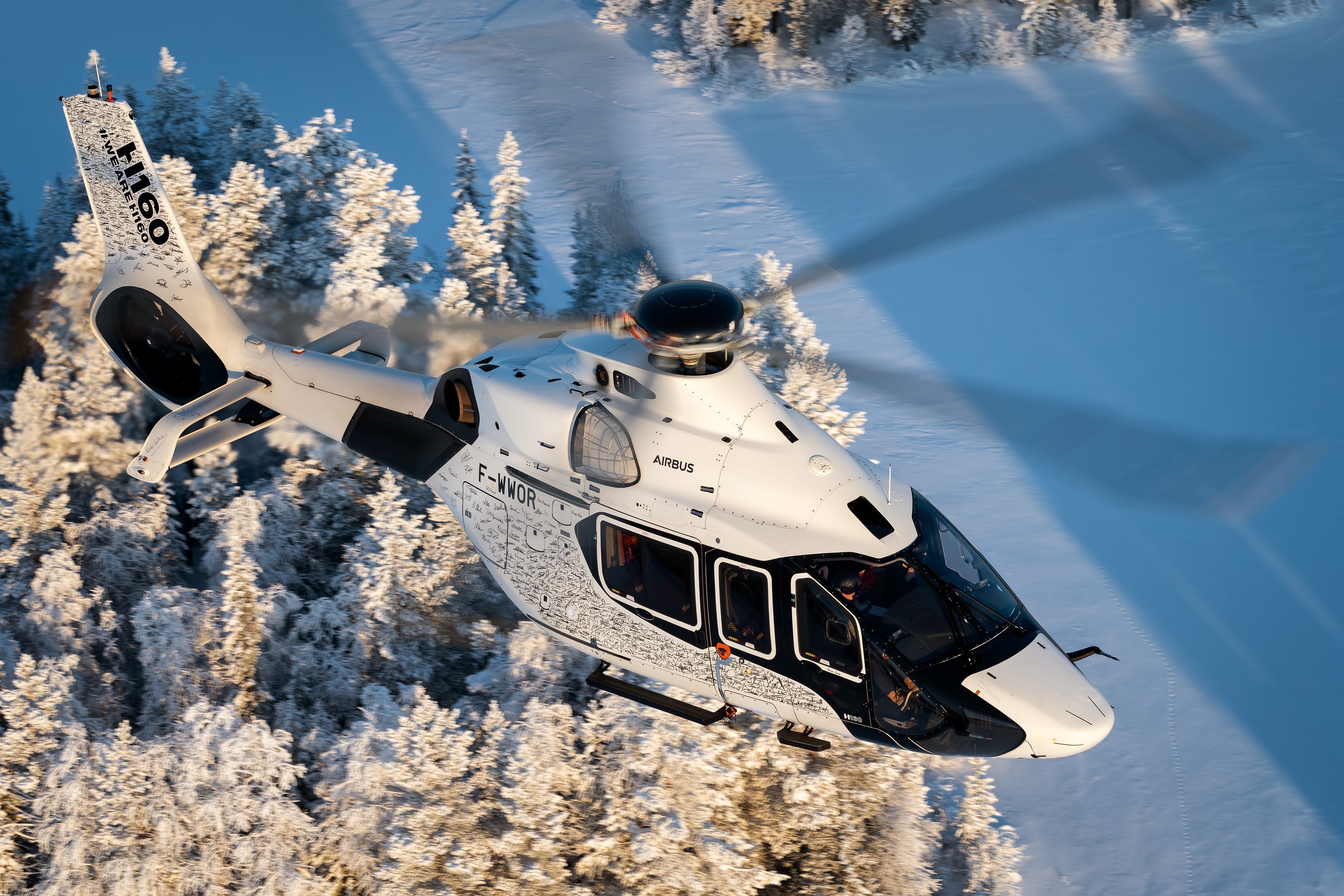 Airbus has high hopes for the H160 in the corporate/VIP sector. Photo: ACH

Lemos said that the entire range of ACH machines – from the ACH130 to the ACH175 – have been selling, with the four-ton-class ACH145 twin-engine helicopter “performing remarkably well.”

And it seems that some of those ultra-high net worth people who also happen to own a sea-going palace want a helicopter on board.

“Demand for yacht-based aircraft is quite strong at the moment and all of the models, including ACH175, have been deployed in that role, although ACH135 and ACH145 are particularly fitted to it,” said Lemos.

Mirroring the almost limitless interior options available to clients of its ACJ-range of corporate aircraft, ACH can customize the completion of a helicopter to meet the needs of the most demanding VIP clients.

ACH Line features a light and efficient design, while ACH Exclusive adds additional comfort and refinement, and is available only on the ACH160 and ACH175. 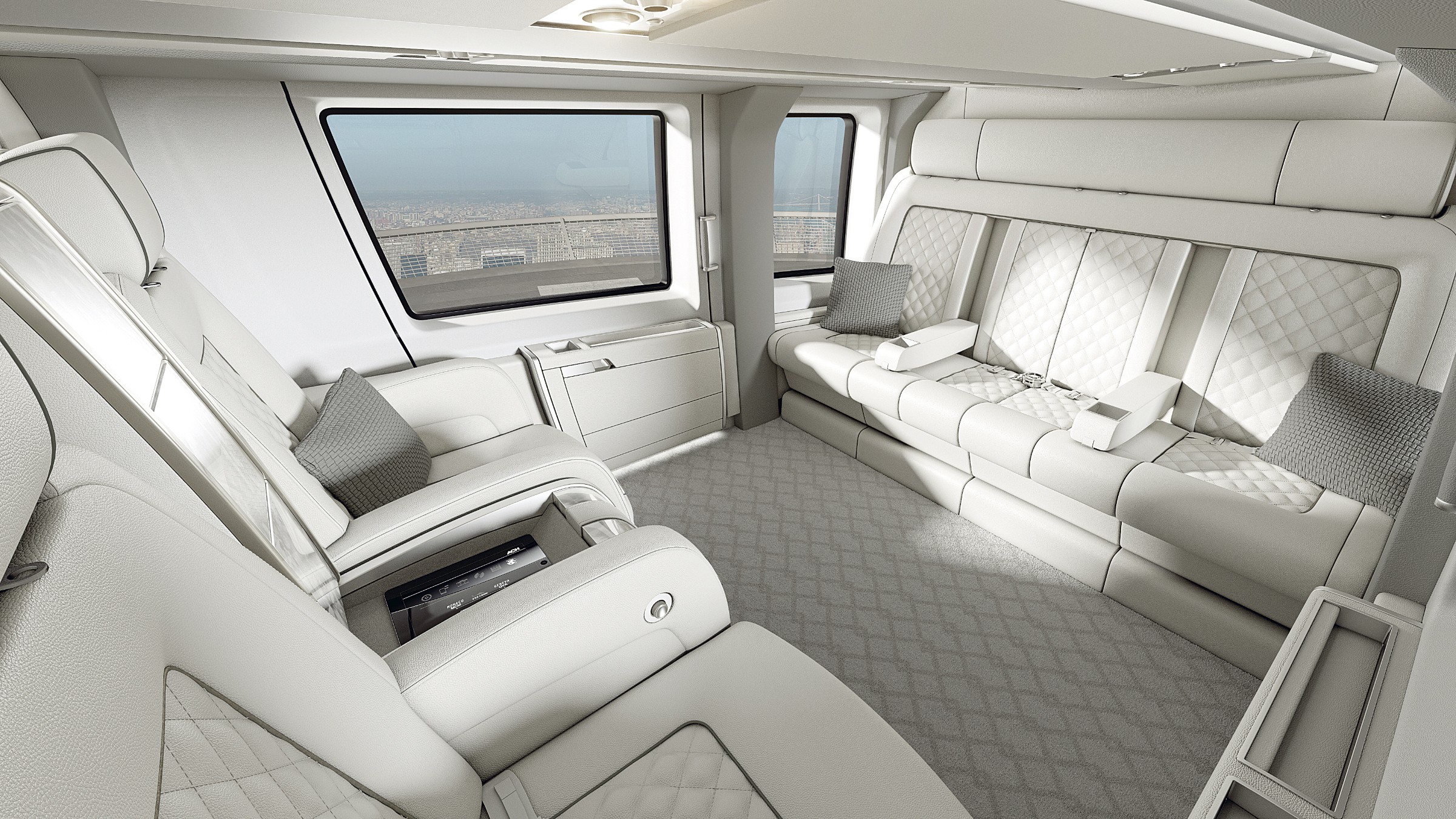 ACH Editions reflect collaborations with luxury brands and designers, such as the ACH145 Mercedes Benz Style, and the ACH175 designed by superyacht impresario Peder Eidsgaard.

Providing these design options is a key element of ACH’s strategy to “provide a spectacular end-to-end customer experience,” said Lemos.

“Some of our customers are primarily looking for an efficient but perhaps rather simple business tool and others will want a highly customized bespoke aircraft with great attention to the interior furnishings and exterior livery.”

Read the original story at Verticalmag.com