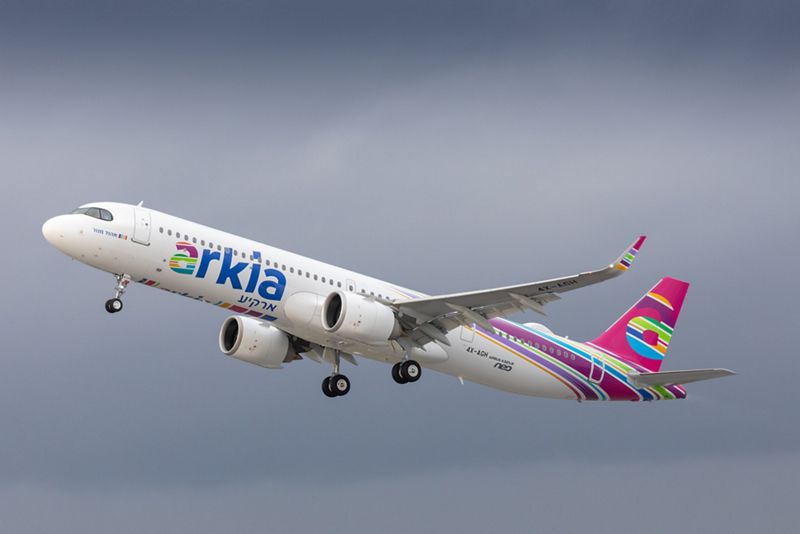 The first Airbus A321LR on its delivery flight to Arkia Airlines. Photo: Airbus

When aircraft designers and aeronautical engineers settle on a configuration and specifications for a new aircraft, it’s likely that the airplane that rolls out of the hangar will just be the first of the type, with variations to come.

The airframer will have considered changes and enhancements to the aircraft early on, to make it longer or shorter, or add power or more range. The basic airframe will have been designed to accommodate the adaptations needed to support these future models, and airlines would have been consulted in the planning stages, ensuring that follow-on airplanes will match upcoming fleet requirements.

Throughout the lengthy production history of an aircraft – over 50 years for Boeing’s 737 and 747, for example – new technologies are targeted for installation. Improvements in aerodynamics, cabin lighting, in-flight entertainment and connectivity, and advanced flight deck avionics and flight control systems are among the myriad updates that have been introduced in the latest versions of successful aircraft.

One such success is the Airbus A320. The single-aisle, fly-by-wire aircraft was introduced into airline service in the 1980s and quickly became a favorite of established legacy airlines and low-cost carriers alike. It seated between 150 and 180 passengers, and the family soon grew with a longer version, the A321. Two shorter models, the A319 and, the smallest member of the series, the A318, rounded out the product line. Over 8,000 A320-family aircraft have been delivered to airlines all over the world.

As the A320 passed its second decade in service, advanced engine technology was being developed by CFM International and Pratt & Whitney, with promises of significant fuel savings. So, in 2010, Airbus offered airlines a “new engine option” version of the family aircraft, called the A320neo, which, in addition to either the CFM LEAP-1A or the PW1100G-JM engines, also featured a host of other enhancements. Over 6,200 A320neo series have been ordered; the first one entered service in January 2016, and more than 550 airplanes had been delivered as of the end of 2018.

But there are airlines that have a need for an aircraft that can stretch their route map out even farther. “You have a history of types that have been uniquely designed for what airlines called the ‘long tent-pole route,’ the longest route on the network,” says Robert Mann, airline industry analyst and former airline executive.

Aircraft such as the shortened Boeing 747SP and the Lockheed L-1011 TriStar were early long-rangers. The Airbus A340-500 and Boeing 747-400 were optimized for distant routes, and most recently, the Airbus A350-900ULR has re-linked Singapore and New York.

“You’ve always had these sorts of airplanes that give a capability and a payload range opportunity that can’t otherwise be met,” Mann says.

Airbus realized that the A321 with new engine technology could be further optimized for long-distance flight. Enter the A321LR, a long-range version that can carry 206 passengers in two classes over 4,000 nautical miles (nm) – 1,000 nm more than the original A321.

“The A321LR is an evolution of a very successful product, the A321. It’s a fantastic platform that historically has been appreciated for having the biggest single-aisle cabin available on the market, especially after the retirement of the Boeing 757,” says Cyril de Tenorio, product marketing manager, single-aisle family, Airbus. “Historically, the A321 was fantastic on routes typically linking two big hubs. With the introduction of the new-generation engines, the fuel efficiency really opened a lot of opportunities to do new things with this aircraft.”

It gets the range boost from several improvements to the legacy airframe. Upturned wingtips that Airbus calls “sharklets” are part of an overall aerodynamic clean-up of the airframe. “You have about 150 nautical miles from the sharklets. Another 350 nautical miles comes from the engine, and the rest comes from the fact that you can carry more fuel,” de Tenorio says. That increased fuel load is stored in an additional center tank – or ACT – with three ACTs installed in the LR, up from two in the standard A321neo.

“One of the great strengths of the A321LR is to go between cities that are perhaps not two huge hubs like Paris and New York, but connecting secondary cities to another secondary city, or a big hub to a secondary city,” de Tenorio says.

Jetstar, TAP Air Portugal, Aer Lingus and Norwegian are among the airlines that have ordered this long-range variant of the A321. Meanwhile, Montreal-based Air Transat will be the first in North America to fly the LR, which the leisure carrier has selected to replace its venerable A310 fleet.

“For many airlines the A321LR is a ‘Goldilocks’ aircraft that is neither too big nor too small for many destinations.” – Dave Bourdages, Air Transat

“We studied all the possible replacements for the A310, and the A321LR was the clear winner in terms of economics, passenger comfort and environmental performance,” says Dave Bourdages, vice-president, In-Flight Service and Customer Experience.

“The A321LR is also the most efficient in [terms of] flexibility, considering the seasonality of our network, between European and southern leisure destinations,” Bourdages adds. “For many airlines, the A321LR is a ‘Goldilocks’ aircraft that is neither too big nor too small for many destinations, especially point-to-point.”

The introduction of the A321LR begins Air Transat’s fleet upgrade, with the airline ultimately operating an all-Airbus fleet of A321LRs and wide-body A330s by 2022. “This will allow us to simplify our operations and maintenance, reduce training costs because of cockpit commonality, and harmonize the customer experience,” Bourdages says. Air Transat pilots will be checked out to fly both the A321LR and the A330, in what’s called “mixed-fleet flying.”

According to de Tenorio, “The aircraft work great together, and they are very complementary in terms of things they can do,” noting that “the A321 is a great tool to open new routes. Once the market is there, once you have the right momentum, or when it’s the right season, you can put an A330 on it.”

Peach Aviation currently operates an all-Airbus A320 fleet from its base in Osaka, Japan, and is adding two A321LRs to expand its network. “We are planning to start ‘mid-haul’ flights – with a maximum of around seven hours – and that is why we chose the A321LR,” says Fatih Yildirim, deputy manager of Corporate Communications, Peach Aviation. “We expect that we can open longer routes with the A321LR and are mainly considering Southeast Asia, such as Singapore, Malaysia, Indonesia and the Philippines [as destinations].”

Meanwhile, Qatar Airways has converted 10 aircraft of its order for 50 A321neo to the A321LR, to support the airline’s global route expansion. “Qatar Airways will use the A321LR to connect Doha to new and growing markets where today demand is not sufficient for wide-body aircraft, or where our current narrow-body aircraft, A320/A321, are unable to reach,” an airline spokesperson says. The airline will also use the airplane to increase flight frequencies on existing routes.

With a single-aisle aircraft capable of flying eight-hour missions, Airbus recognized that onboard systems must also accommodate passengers’ needs – right down to the lavatory systems. “For the waste tank, we offer an option to increase the capacity from 177 liters to 250 liters,” de Tenorio says. “We have an ongoing project investigating the increase of the fresh water tank. What counts is that the current capacity has been delivered and works well in operations.”

A321LR passengers will fly in the Airbus “Airspace” cabin, which includes the signature design features that provide “the passenger with a consistent experience, with lights, colors and patterns that uniquely describe an airline’s brand,” says Roser Roca-Toha, Airbus’ aircraft interiors marketing director, Americas.

Airlines are developing new configurations for the long-range model, with some A321LRs leaving the assembly lines with three- and four-class interiors. “We have invested in new full-flat solutions arriving on the A321LR. You’re going to see more and more full-flat seating on the A321LRs, and we’re looking at an equivalent level of comfort and service as on a widebody,” Roca-Toha says.

And for those passengers bringing the contents of their closets on board, the A321LR will be able to handle lots of carry-ons, Roca-Toha says. But will the A321LR meet the magical metric and have room for every passenger’s Rollaboard? “Absolutely, yes! When it comes to the A321LR, Airspace will offer the largest overhead stowage compartment that exists in the market today – not only in terms of the number of bags, but also the size of the bag,” she adds.

Having all those personal items on board would be useful on a recordbreaking flight, like that performed by an A321LR between Mahé in the Seychelles to Toulouse – an 11-hour marathon covering 4,750 nm. But the A321LR is more likely to be seen at airports not quite so far from their home bases – linking Montreal and Bordeaux, Lisbon and Recife, and Dubai and Beijing.