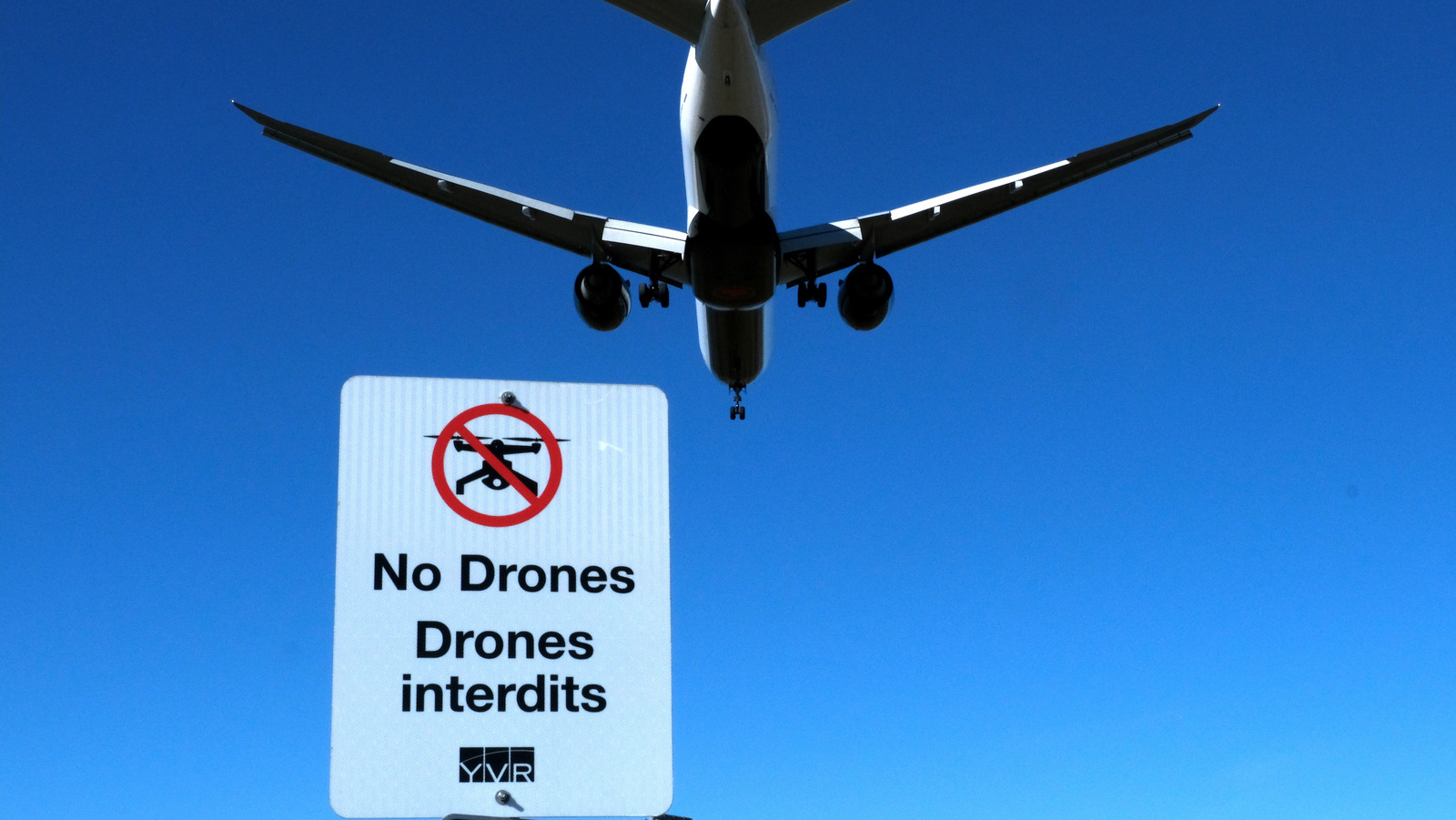 Vancouver International Airport – YVR makes it clear that it’s a “No Drone” Zone.

Doesn’t it seem like common sense? That it’s a bad idea to fly a drone near an airport? And that it’s probably against the law too?

This doesn’t seem to have stopped drone owners near London Heathrow, London Gatwick, Newark, Dublin and Dubai airports. Over the past months, these airports had flight operations grounded because of apparent drone incursions in the restricted airspace used by landing and departing aircraft.

Just before Christmas 2018 at London Gatwick, the travel plans of more than 140,000 passengers were disrupted and 1,000 flights were canceled over 36 hours, after reported sightings of drones stopped all movements at the airport.

Drones have been reported in and around restricted airport airspace around the world, sometimes spotted by pilots. Airborne firefighting operations have also been grounded because of unauthorized drones — a grave safety issue for the pilots trying to save homes and forests, using helicopters and aircraft.

Although there have been but a handful of verified collisions between drones and aircraft, there continues to be concern that the impact between a drone and a large commercial aircraft could result in a tragic accident.

So, focusing on passenger safety, airport operators have been holding all departing and arriving flights when drones are spotted.

But are the people responsible for creating major havoc around airports just looking to create the next viral video sensation? Perhaps.

“The majority of people flying [drones] illegally near airports or crowded places are what I call ‘idiots’,” says Andrew McQuillan, owner and director of Crowded Space, a specialist drone company that deals with public safety and keeping airports safe.

“That’s based on our statistics on who we’ve actually dealt with, and arrests we’ve had, so it’s not just hypothetical. We have the evidence to back that up. The vast majority of these people clearly didn’t know what the law and rules are at the time of flight,” says McQuillan, in an interview with CNN Travel.

Those laws and rules are starting to catch up with the millions of drones that have been sold to consumers and commercial operators.

Some countries will require pilots to take a knowledge exam, register their drones with a central agency, and attach a visible registration number to the exterior of a drone.

Specific airspace restrictions — around airports and other critical infrastructure and public gatherings — are either in place or being defined, and it’s likely that most law-abiding drone operators will follow the rules.

But if they don’t? How does an airport deal with a rogue drone?

“The detection and the response are two very different things,” explains McQuillan. “We’re getting on top of the curve now on the detection side, but until we get on top of that fully, we’re not going to be able to prepare for the reaction phase.”

Military anti-drone equipment has the capability to detect, identify and track drones. Experience in the Middle East has shown that while these systems have the ability to bring down a drone, it’s one thing to operate over barren desert, and another thing entirely to deal with a drone over a busy airport in a congested urban area, according to McQuillan.

“We’ve had personal experience with firing guns, radio frequency systems and other ballistic options with shotguns loaded with different things. They all have massive drawbacks.”

“You’re weighing the balance of doing something to the drone or leaving it be for a few minutes while it’s doing its thing, and protecting the lives of the people under the final approach or taking off. At the moment, I can’t see any other option than protecting those lives by stopping traffic.”

That seems like a huge investment for any airport in order to deal with “idiots.”

The investigation into the Gatwick incident is ongoing and last month it was reported by the UK’s Sussex Police that it may have been an inside job. The force said in a statement that, based on the behavior of the drone, it’s possible the pilot had either first-hand knowledge of the “airport operating environment,” or access to that information.

McQuillan cautions that there are other groups with tactics that may already be in play.

“For several years ISIS has been exporting the knowledge of how to use drones dangerously for terrorism, outside of Iraq and Syria. As with everything in the world, there’s always a way to cause harm and destruction. Realistically, it doesn’t have to be a drone to cause disruption at an airport,” he says.

But while the specter of a terrorist act may weigh heavily on McQuillan, government agencies and airport operators, it’s more than likely a consumer looking to have fun with a newly purchased drone who may be the culprit.

That just-unboxed drone has probably been manufactured by Shenzhen-based DJI Technologies, a company with a reported 74% share of the drone marketplace. And with such a huge share, DJI knows that it plays a key role in keeping skies safe.

“As the leader in the field we feel that we do have a special responsibility to provide safety and security precautions. Even if they’re not required by law, but just because we think it’s the right thing to do as corporate citizens,” says DJI spokesperson Adam Lisberg.

“The overall trend is clear that the overwhelming majority of drone pilots do want to fly safely and responsibly. It’s a staggeringly small number of people who actually set out to cause trouble.”

Lisberg explains that DJI is using both education and technology to make sure drone owners are being responsible pilots. Using GPS, drone software can provide specific guidance about restricted areas.

DJI’s Aeroscope system is capable of analyzing a drone’s telemetry, identifying not only the drone’s airborne information, but also the GPS location of the pilot.

“You need to take the knowledge quiz, if applicable. You need to familiarize yourself with the rules for flying drones. You need to pay attention to the advisories that show up through our geo-fencing system. There are rules to follow — they’re not that complicated. The goal is safety, and assuming you [operate] safely, you’re going to have an awful lot of fun,” says Lisberg.

And it’s important to keep up to date: the UK introduced new legislation in March, extending the ban on drone use in the vicinity of airports from one kilometer’s distance to five kilometers.

We can only hope that common sense prevails in the skies around airports, something that isn’t yet apparent to McQuillan, who believe that the weight of the courts may help.

“Two days after Gatwick, a man was charged with flying a drone near Heathrow. High-profile prosecutions of those people will be the best way to deal with them.”