Sims for schools: The value of flight simulators 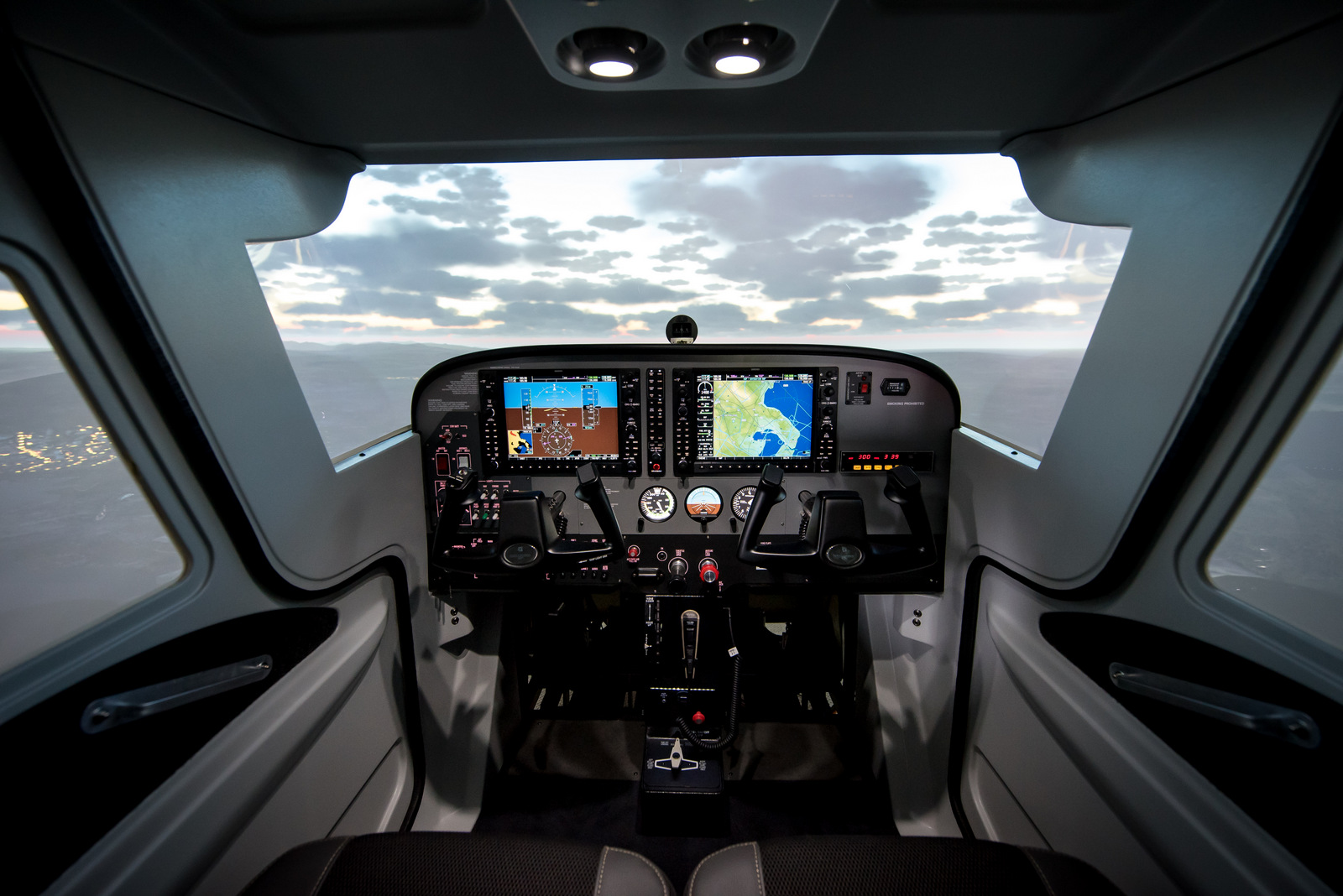 France’s Alsim has been building flight simulators since 1994. Shown here is the company’s AL172, an exact replica of the Cessna 172SP Skyhawk with Garmin G1000 NXi avionics suite. It is certified as a Level 5 flight training device in Canada. Alsim Photo

A session in a flight simulator can be invaluable for practising rarely-flown manoeuvres or complicated instrument procedures. With the increased realism of the newest flight training device at your local flight school or college, a sim session can also cause sweat to form on the palms of even the coolest pilot.

“There’s a big difference between the simulators that were around 30 years ago and what’s available now,” said Clark Duimel, executive director and chief flight instructor at the Pacific Flying Club (PFC).

“You’d work with somebody doing an instrument rating in the simulator and it was always about teaching them how to fly the simulator – it was so different from flying the aircraft.”

Based at the Boundary Bay Airport (CZBB) in Delta, B.C, the PFC has a fleet of 30 single- and twin-engine aircraft, and three flight simulators – an Alsim AL200 and a newer AL250, and a Redbird FMX.

“Our AL200 was our first new age simulator, which has an advanced control loading system. So, when you’re flying it, it is like flying the airplane.”

Alsim Flight Training Solutions is one of several companies – including Redbird Flight Simulations and Frasca International – that have Transport Canada-approved sims “flying” at schools across Canada.

The French flavour of Alsim

Based in western France, Alsim has been manufacturing certified flight simulators since 1994. Its product lineup ranges from the entry-level AL250 to the soon-to-be-introduced “Airliner.”

The AL250 can be easily reconfigured to reproduce the panel and flying characteristics of a range of analog and glass cockpit, single- and twin-engine aircraft. Pricing for the AL250 starts at about US$150,000, and can reach US$200,000, depending on options.

The Airliner is a high-end, multipurpose hybrid simulator for both fly-by-wire and conventionally-controlled transport aircraft and is designed to provide a platform for training in multi-crew co-operation and line-oriented flight training, among other procedures.

“The big focus of our company has been on the immersion of being in a simulator – that feeling that you’re not actually in a sim, but you’re closer to being in an aircraft as much as possible,” said Scott Firsing of Alsim’s North America office.

With advancements in computing power, graphics cards and video projection systems, sims aren’t just applicable to traditional instrument training. They can be part of basic ab initio training, too.

“It is very much in the syllabus [at PFC],” said Duimel. “There is a lesson before [students] start flying in the circuit. We do a sim session on emergencies, bounced landings, wheelbarrowing and things like that, which you can simulate pretty well.

“When we first got the simulator, we didn’t really have a program for doing VFR (visual flight rules) work in the sim. But that changed after you start to realize how powerful it is and how nice it is to fly. The Alsims don’t have a motion base, but you really do get the feeling that the aircraft is moving.”

According to Firsing, many years ago Alsim debated whether to develop motion bases for its simulators. Instead, the decision was to build fixed-base sims and focus on control loading and visual display technologies.

And the company has recently introduced a new way to increase the immersive experience that gives new meaning to “seat of the pants” flying.

“We have something called a ‘butt kicker,’” said Firsing. “It’s linked to our software, with a subwoofer under the seat for engine noise, turbulence, and hard landings.”

As it celebrates its 25th anniversary, Alsim will soon open a new facility in Florida which will build simulators destined for Canada and the U.S.

Firsing believes that Alsim’s strength is in its in-house engineering expertise: “We do as much as possible in-house. All our software is done by our own software engineers. Our hardware guys make every little switch in our factory in France. The versatility of doing it all in-house allows us to operate in over 50 countries. It also allows us to modernize and incorporate new technology,” he said. 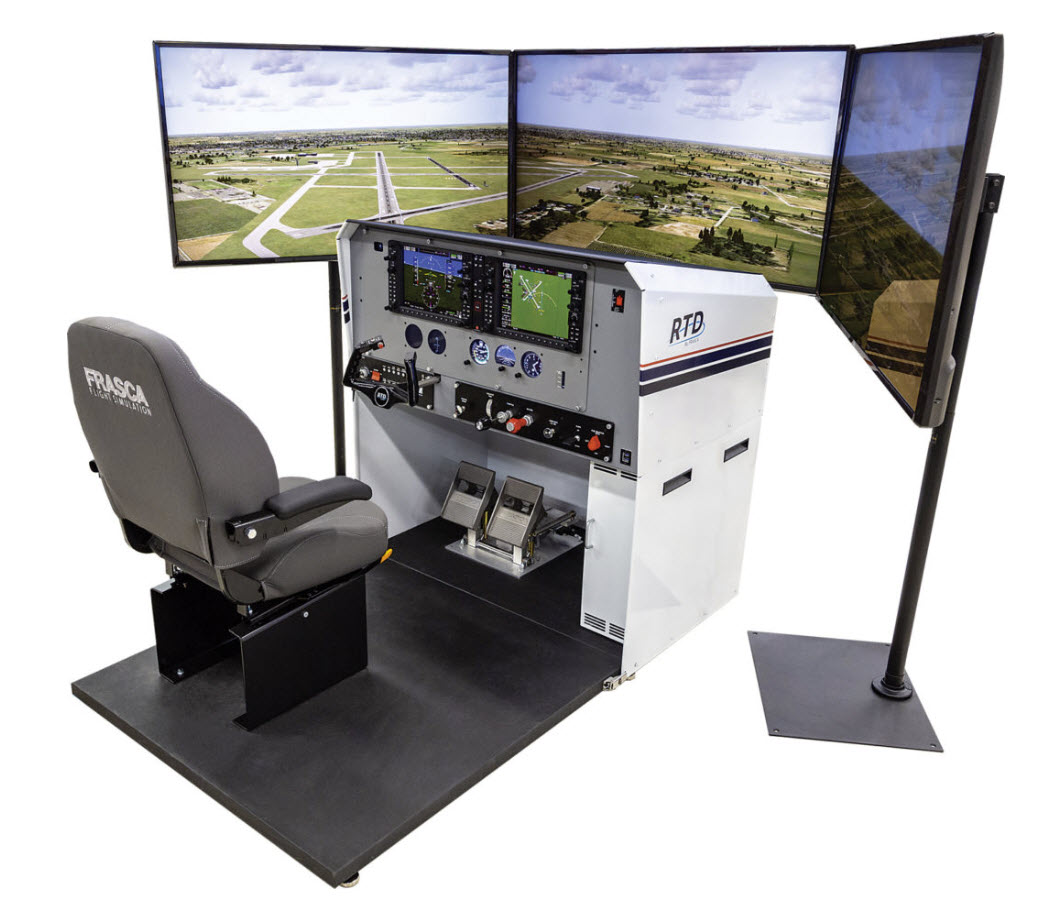 With more than 2,700 simulators sold in 70-plus countries, Frasca International is well known for its training devices. Shown here is the RTD (Reconfigurable Training Device), an entry-level unit that incorporates actual flight test data with real Garmin avionics software. It can be changed from analog to glass cockpit and from single- to twin-engine. Photo: Frasca

It’s been more than 60 years since Rudy Frasca founded the company that still bears his name.

Today, with more than 2,700 simulators sold in 70-plus countries, Rudy’s son John is CEO of Frasca International, carrying on his father’s mission to improve aviation safety though better pilot training.

“It’s a privately-owned business that started as a grassroots industry, and it’s [born] from a love of aviation,” said Peggy Prichard, marketing manager, who also happens to be Rudy’s daughter.

Starting from the basic flight training devices that Rudy built in his garage, Frasca grew and has become known for its sophisticated full flight simulators for both fixed-wing aircraft and helicopters.

“It’s robust, reliable, realistic and it’s reconfigurable, with aerodynamics that incorporate actual flight test data with actual Garmin avionics software. You can change it from analog to glass cockpit, from single to the twin, from the 172 to the Seminole, and we’re working on several different kits,” said Prichard.

“The RTD’s controls and structures are manufactured by Frasca and designed to withstand the rigours of heavy training schedules, with a modular design for easy maintenance.”

With a starting price of US$50,000, the fixed-base RTD is targeted at smaller flight schools.

“Our specialty is the middle-level flight training device (FTD), and we realized a lot of customers can’t afford more than $100,000 for a Level 5 FTD that some of the larger flight schools can afford,” she said.

A first glance at its hardware might imply the cost of the simulator is high, but there’s a good reason – flight test data is expensive.

“There’s a huge amount of cost that goes into getting the data, sometimes from the aircraft manufacturer, or else we have to engineer it ourselves,” explained Prichard. 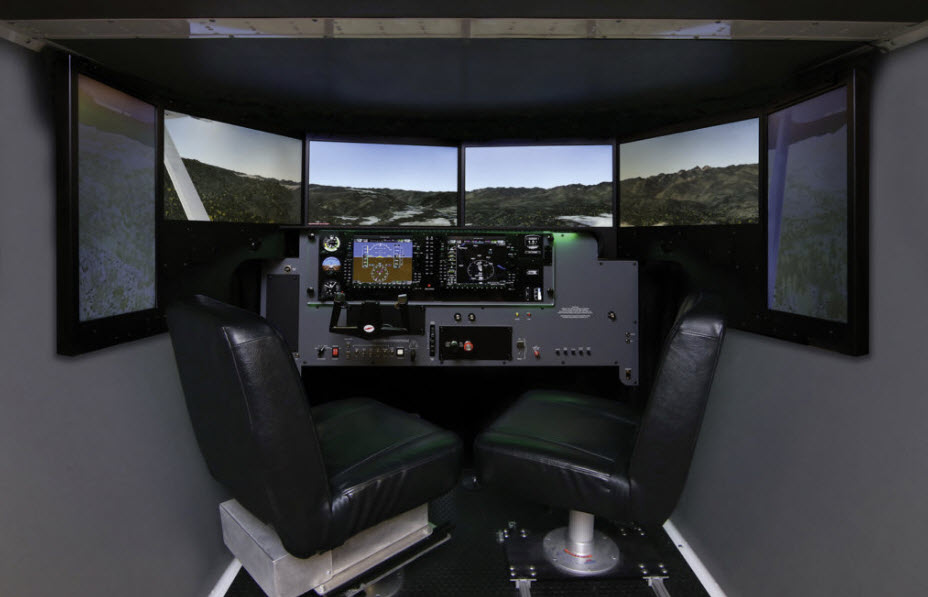 Redbird’s FMX is an enclosed simulator with multi-screen visuals and software that can mimic dozens of aircraft. It fits in a 16’x16′ space with an eight-foot ceiling, and plugs into a normal wall outlet. Photo: Redbird

In 2006, when Austin, Texas-based Redbird Flight Simulations was developing its first simulator, it repurposed a decaying Cessna 177 Cardinal RG to form the cab of its new sim.

Although it might have seemed like a good idea at the time, the Cardinal RG eventually ended up back in the boneyard – but not before it inspired the company’s name.

Redbird’s FMX was the first product, an enclosed simulator with multi-screen visuals and software that can mimic dozens of aircraft. In its current version, based on Lockheed Martin’s Prepar3D flight simulation software, the FMX can shift from one aircraft type to another in less than 10 minutes, including changing the sim’s panel template.

“One of the key design criteria for the FMX was that it had to fit in the normal classroom and run off of a normal wall outlet,” said Josh Harnagel, vice-president of Marketing for Redbird.

“We couldn’t demand specific facility requirements for it to be a viable product. You can break it down and it fits through a normal door and runs in a 16 by 16-foot space with an eight-foot ceiling.”

The FMX is certified by the U.S. Federal Aviation Administration (FAA) as an AATD. It includes a feature that might be unexpected at the unit’s price – a three-axis motion base, driven by electric motors and belts.

After introducing the FMX, Redbird decided that the next opportunity was to create a more accessible unit at a lower price, rather than moving into more sophisticated and costly simulators.

“We came out with the Redbird TD product line, which is a desktop sim. The FAA has certified the TD as a basic aviation training device (BATD), and the price point is around US$6,000 to $7,000 depending on your options. That’s been a big success,” said Harnagel.

Even with the TD’s popularity, Redbird has sold more units of the Jay, an uncertified desktop simulator that’s popular with individual pilots for home practice.

With a starting price of US$3,000, the Jay can be set up in as little as five minutes and comes preloaded with a wide selection of planes from a Cessna 172SP to a Lockheed Constellation.

Redbird has filled out its product line with a range of simulators, including the unique Xwind crosswind trainer and the high-end AMS, a cockpit-specific AATD for turbine aircraft.

The company’s philosophy extends beyond the latest tech for hardware.

“Early on, we recognized that one of the key things that we could do to make our products more valuable was to add software tools. We thought we could get more training value out of adding a whole suite of software products to make the training more valuable for the instructor and the students, and for the businesses that operate our sims,” said Harnagel.

One of the software tools that Redbird developed for private pilots is GIFT – Guided Independent Flight Training. There are 33 missions for pilots to fly, each up to seven minutes long. GIFT can run on any Redbird sim with a Cessna 172 panel. Since GIFT is licensed to the pilot, they can use it at home on a Jay.

“It sets them up in the right spot and in the right configuration. There’s audio coaching in the mission that they fly and there’s artifacts like gates and arrows that they fly through, and then they get a score based on the standards to pass the check ride,” explained Harnagel.

Redbird has also recently released a version of GIFT for instrument training.

Sometime in 2020, Microsoft will release the newest version of its iconic Flight Simulator for its Xbox One gaming system and Windows 10 PCs.

Microsoft recently unveiled a video preview of Flight Simulator, showing richly detailed graphics and aircraft – a far cry from the crude display of the original FS that was released close to 40 years ago.

Perhaps the new game will inspire a new generation of enthusiasts who will be interested in aviation careers, hopefully addressing the global pilot shortage. But that may depend on the control interface that Microsoft designs into the new version.

Flight simulators have come a long way. Today, they provide a realistic alternative for practising rarely-flown manouevres or complicated instrument procedures. Mike Reyno Photo
“As the way you’re controlling the aircraft gets better and better, the home computer system is going to become more and more important to the whole process. I think it’s a really valuable tool for people,” said PFC’s Duimel.

“Sometimes we get people who’ve tried to teach themselves how to fly with a game. But they could’ve used a couple of lessons early on,” he chuckled.

The capital investment that a flight school can make for a new simulator can be significant. Although there’s little doubt that a sim can benefit students working through a flight training program, it’s important for schools to choose the manufacturer and model that meshes with their aircraft fleet and instructional philosophies.

“The most important thing they should consider is how they’re going to integrate the simulator into their curriculum,” said Redbird’s Harnagel. “A big part of my job is teaching the industry, flight instructors and flight schools, how to best use the sim.”

Having instructed for years, what is Duimel’s advice to a school looking to purchase a new simulator?

“I truly believe that as things progress, we’re going to be doing more and more in the sim.”

Read the original story at Skiesmag.com