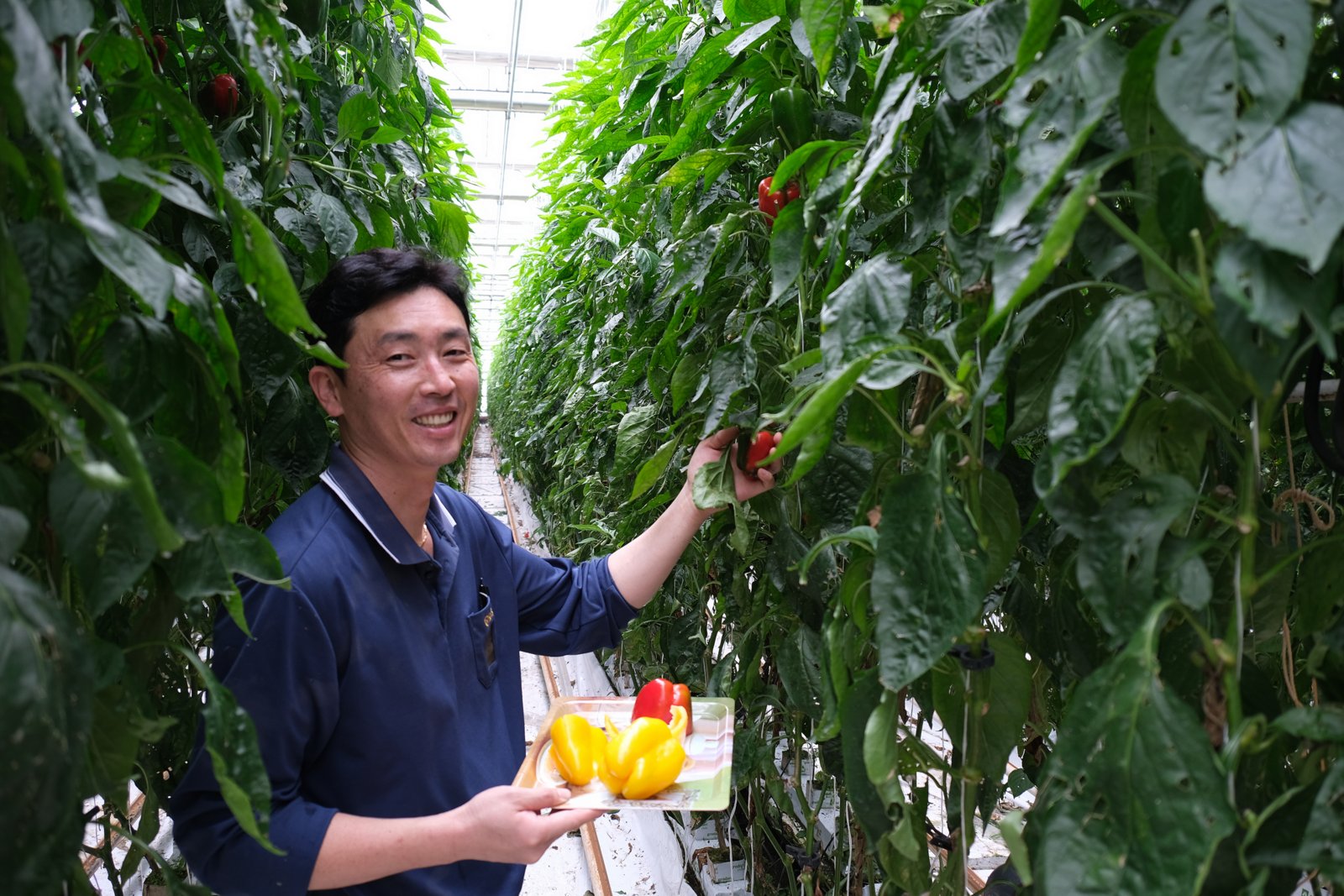 Hyunho Kim smiles as he picks a perfectly formed, bright-red bell pepper from a vine that stretches 20 feet up toward the roof of the hydroponic greenhouse. “I came here right out of university, where I majored in agriculture,” he says. Kim is one of the approximately 100 people who work at Korean Air’s Jedong Ranch and has been tending bell peppers (locally known as “paprika”) for more than 15 years. With each new crop, it’s clear that Kim has found his calling. “We change the plants over, and then when I see the seedlings and all the greens growing, that’s the best moment.”

LAY OF THE LAND

Located on Jeju Island, about 55 miles off the southwest coast of South Korea, Jedong Ranch has been operating since 1972, supplying produce, meats and spring water to Korean Air’s in-flight catering operations. The five-acre greenhouse complex is tucked into a corner of the 3,200-acre ranch, located east of UNESCO World Heritage site Hallasan National Park, where Mount Halla, the volcano that created Jeju Island, remains.

The ranch is part of a property owned by Korean Air that includes Jeongseok Airport, home to the airline’s flight training center. The farm grows bell peppers and cherry tomatoes that are delivered to the airline’s flight kitchens at Incheon and Gimpo international airports, a trip that takes four hours by truck and plane. Once there, the produce is prepared, with 165 tons of cherry tomatoes grown annually finding their way into meals for flights departing from South Korea. Most of the bell peppers are served as a soup in the airline’s first and Prestige classes, as well as in salads and side dishes. Not all of the peppers are used for in-flight catering – about 40 percent are sold through retail outlets or online via the airline’s e-Skyshop catalog, along with some of the greenhouses’ tomato crop.

“The vegetables are not organic, but we are cultivating them in an environmentally friendly way and not using any antibiotics,” explains Jongdo Lim, managing director of the ranch. Lim adds that the farm is also growing romaine lettuce, asparagus, melons, passion fruit and blueberries, but “not for the flight kitchens. We’re testing these out, and for now are selling them for retail.”

Jedong is a ranch – not huge, but big enough for 2,000 head of native Korean Hanwoo cattle. About a quarter of the herd is made up of breeding stock, with the rest supplying 55 tons of meat per year to the flight kitchens. “All the cattle graze in the pastures, and they are fed with grass that is managed in an eco-friendly way with compost,” said Lim. With a focus on proper stewardship of its herd, the ranch has obtained certifications that cover non-antibiotic use and environmentally friendly farm operations, and it is working on one for animal welfare.
Jedong also raises chickens – about 8,000 birds. The chickens are used in the airline’s catering operations for grilled chicken breast, chicken soup with rice and the famous Jedong Korean Ginseng Chicken Soup served in first class. Where there are hens there are eggs, and 100,000 of them are sold per year.

Much of what’s done at Jedong Ranch is focused on providing passengers with healthy, fresh, farm-to-flight ingredients, but also as a component of Korean Air’s sustainability efforts. In order to minimize food waste, the airline analyzes passenger menu preferences on its routes and adjusts the meal options accordingly. Food preparation has also been optimized to reduce unnecessary food waste, and aluminum, plastic and paper from in-flight service is collected and recycled. Last year, the airline made the shift from plastic straws and stir sticks to paper products, and it plans to change from its current plastic serving dishes, cups and lids to more eco-friendly materials.

Another key element of Korean Air’s vertically integrated in-flight catering originates deep from within the unique geological landscape of Jeju Island. The volcanic island is woven with water-permeable lava flows, and rainwater is naturally filtered as it penetrates the layers of rock. There are natural springs and wells that feed the water back to the surface, including one at Jedong Ranch.

For over 30 years, Korean Air has been bottling the water, making Hanjin Jeju Pure Water a signature product available to its passengers, to visitors at the airline’s Korean hotels and to a dozen other airlines. And in recent years, a facial mist for first-class and Prestige passengers was added to the product line. The water is drawn from a 1,066-foot-deep aquifer at Baekrokdam – the main crater of Mount Halla. Rainwater travels through five to 10 layers of porous basalt to become soft, natural mineral water.

“Jeju Island contains the best-quality water in the country,” says Lim.“The water is so clean when it comes into the plant that it’s only filtered once.” The Hanjin Jeju Pure Water facility was developed with technical assistance from iconic French water brand Evian. And up to 30 million bottles are manufactured per year, in five different sizes, from small cups to large jugs.

From this small corner of Jeju Island, Korean Air has been quietly enhancing its passenger experience by bringing the fruits of its labor to in-flight meals. But what does Hyunho Kim think when he sees his fresh “paprika” on a meal tray during a flight? “I grew that! And I’m very proud of what I do.”