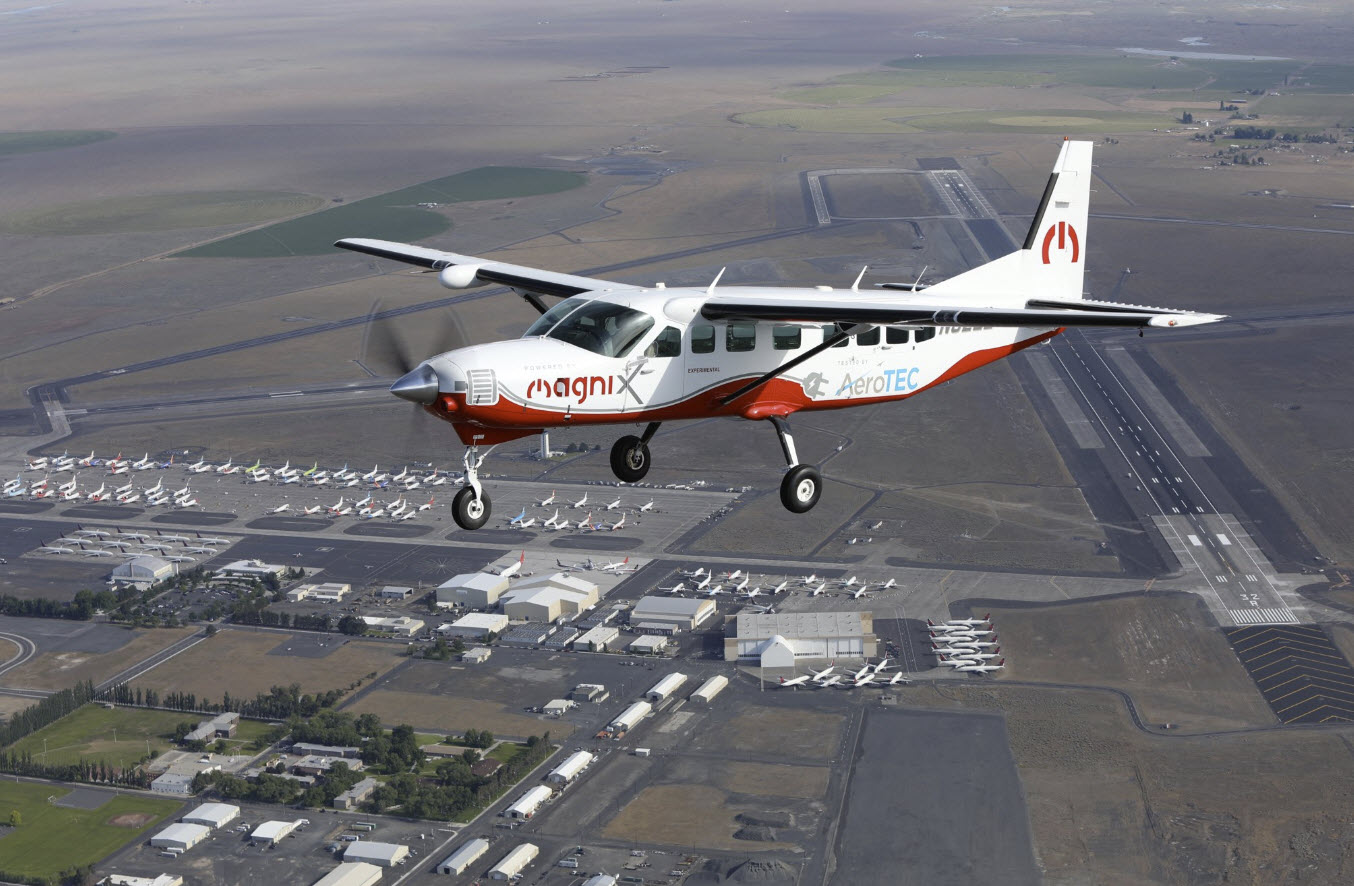 The next step in electric flight took place on Thursday morning, May 28, with the first flight of a Cessna 208B Grand Caravan powered by a magniX electric propulsion system.

The Caravan was converted by AeroTEC, a company well known for aircraft modification, engineering, and airframe integration.

What is now the world’s largest all-electric commercial aircraft had a flawless half-hour test flight after lifting off at 8 a.m. local time from Central Washington’s Moses Lake Airport.

“The airplane beat our expectations. Certainly, from our perspective on the ground, watching that initial climb out, there were a lot of people smiling and applauding. It was truly magnificent — and super quiet,” said Lee Human, AeroTEC’s CEO and president.

“This 30-minute flight would have cost us $6 in electricity compared to $300 to $400 in fuel, and the Cessna 182 chase plane was louder than the Caravan,” added Roei Ganzarski, CEO of magniX.

While the Beaver’s motor was derated to 450 horsepower, to match the output of the plane’s stock Pratt & Whitney piston radial, the Caravan’s magni500 will run at full power – the electric equivalent of 750 horsepower.

“Both aircraft are completely all electric. It’s the same propulsion system, it’s the magni500 in both aircraft, the same inverter, the same battery controllers,” said Ganzarski, in a pre-flight interview with Skies.

“Both of these are flying testbeds. There are no seats in them, the batteries are in the body of the aircraft. It’s to test the propulsion system and the electric system, not to try and fly people around.”

The batteries are mounted in the plane’s cabin to give engineers and technicians easy access, and there are video cameras in the fuselage so that the status of the batteries can be monitored during the test flights.

Ultimately, once the propulsion system has been certified, Ganzarski thinks the battery packs could replace the plane’s wing fuel tanks, or be placed in the Caravan’s belly cargo pod or forward of the firewall, since the magni500 takes less space than the P&W PT6A turboprop that normally powers the 208B.

The batteries installed in both the Caravan and Beaver were selected for reliability, safety, and capability, and “aren’t the best we can get from either a power density or a packing perspective,” explained Ganzarski.

Improvements in battery technology are advancing rapidly, and Ganzarski expects this will enable magniX-powered aircraft to fill the “Middle Mile” mission – passenger and cargo flights of up to 1,000 miles – by the time the certification program is completed, in less than two years.

“Over the next 12 to 24 months, everyone recognizes that there will be a substantial improvement in the energy density for flight-worthy battery systems,” added Human.
As a self-described “electric-power evangelist,” Human points to the environmental, operational and maintenance benefits of electric flight, along with the low-noise footprint of the propulsion system.

“You’ve got outlying villages in northern Canada, where it’s difficult and costly to transport petroleum fuel to some of these airports. But they have plenty of space for a solar battery charging system – that’s easy for us to get our minds around. Suddenly, you’ve enabled a community to receive an electric airplane.”

Read the original story on Skiesmag.com