When your plane touches down but doesn’t land 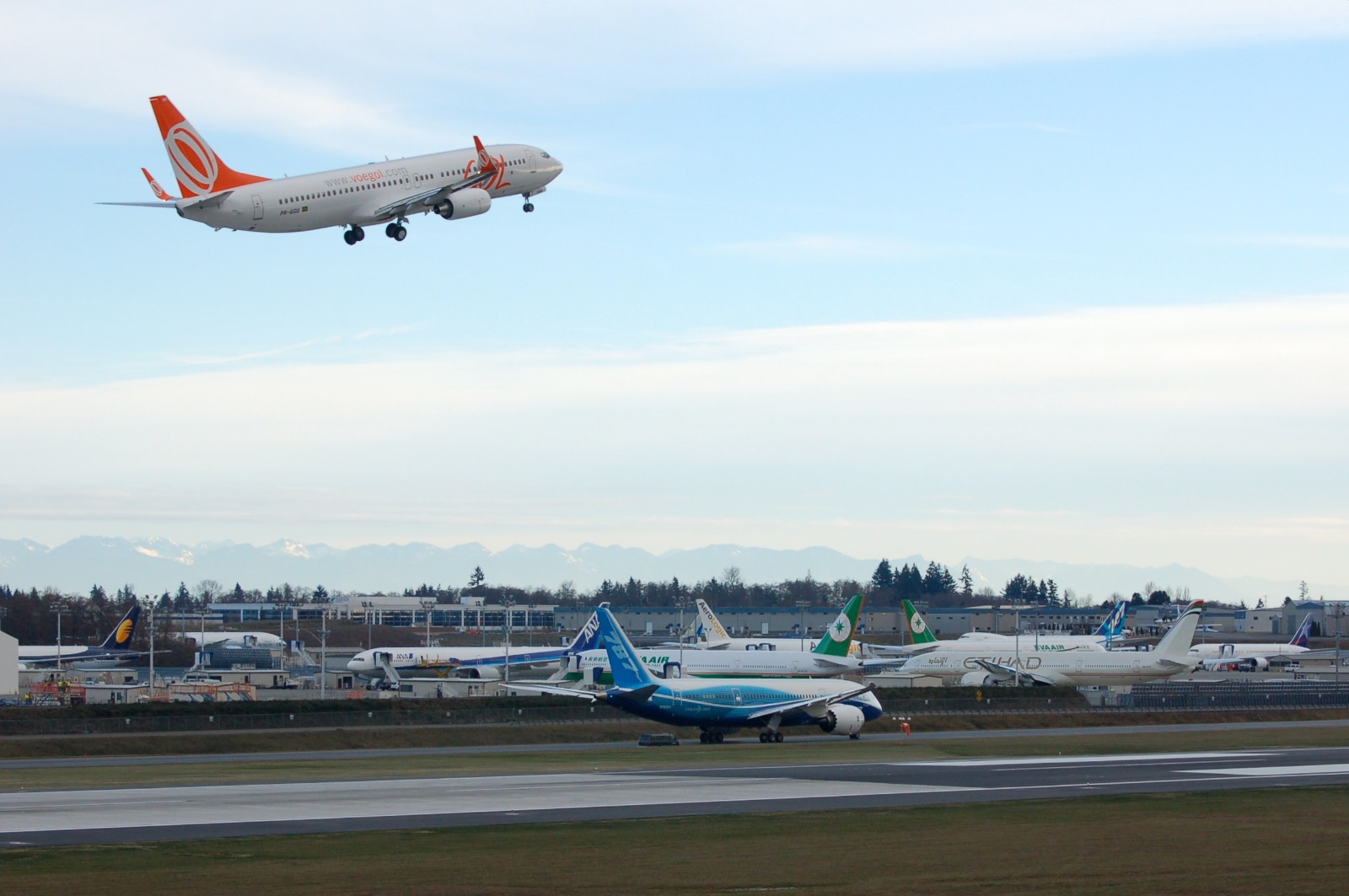 A GOL 737 does a go-around at Paine Field in Everett, WA.
Photo: Jon Ostrower

The scene: A random airport on a random day.

It’s the end of a long flight as the Boeing 777 approaches the airport, a destination known for strong crosswinds on blustery days like this. Reaching for the runway, the huge plane flares, floats a little, then touches down with a wiggle.

But instead of hearing the roar of reverse thrust and feeling powerful brakes start to slow the plane, the passengers are pushed back into their seats as the 777’s massive and mighty GE90 turbofans quickly spool up to takeoff thrust.

With most of the fuel used up during the lengthy flight, the now lightly loaded jetliner pitches up and rockets into the air, climbing quickly away from the runway.

The plane’s landing gear folds up, and those seated by the windows can see the wing’s flaps start to retract.

The passengers look at each other just as the captain comes onto the intercom and says, “Well, folks, the winds were a little squirrelly just as we touched down, so we decided to head back into the air. We’ll come around for another approach, and we should have you safely on the ground in 10 minutes or so.”

What happened in those last seconds of the flight?

The flight crew has performed a rejected or “balked” landing, one of the many skills that pilots practice and are ready to use on every touchdown.

Related content: 10 things that happen before your plane can take off

A balked landing is accompanied by a “go-around,” which is exactly what it sounds like: The plane picks up altitude and turns back to fly another approach to the runway.

“A balked landing is an easy, safe maneuver, and it’s the thing to do whenever you think it’s appropriate,” says Dann Runik, executive director of advanced programs at FlightSafety International.

FlightSafety has provided comprehensive flight training programs since 1951 and operates a worldwide web of learning centers and flight simulators. Runik, currently a Boeing 777 captain, has over 24,000 hours in the air. He’s qualified to fly many different aircraft and spent two decades as captain of the Boeing 747, the “Queen of the Skies.”

Runik tells CNN Travel that while there may be variations in aircraft manufacturers’ guidance, pilots are “absolutely free to balk the landing and go-around until the selection of reverse thrust. From that point on, the theory is it’s better and safer to continue the ground rollout to a stop.”

A jet’s thrust reversers redirect the engines’ exhaust forward to create a braking effect, and along with powerful wheel brakes, slow an aircraft after landing.

At any point during an approach to an airport, the flight crew can decide to climb away and not complete the landing.

Among the reasons to go-around: The weather or winds might be unacceptable, based on the airline’s operating procedures or the aircraft’s limitations; the pilots may have uncovered a mechanical issue and decide to troubleshoot the problem in the air; or the crew has recognized that the approach isn’t stabilized, with the plane at a specific speed and altitude in landing configuration — an important criterion for a successful and safe landing.

Air traffic controllers may also declare a go-around for the crew. Aircraft on approach might be following each other too closely, or the tower controllers may have seen something on the runway that could cause a safety problem during landing.

An arriving plane might not have fully cleared the runway, a vehicle could be doing an inspection, or a snowplow might be hard at work. There could be garbage that could get sucked into an engine, or animals on the runway — birds, deer, dogs, moose, and even mating turtles have caused a go-around.

“In training we probably do as many go-arounds as landings, in fact, we likely do more go-arounds than landings. It’s a tremendously highly trained maneuver, one that we’re very good at performing,” says Runik.

Virtually all airline flight training is now done in advanced flight simulators that have cockpits that are exact duplicates of an airline’s planes. In addition to incredibly detailed visual displays, the “sims” reproduce the movement, response and sounds of an aircraft with sweat-inducing realism.

Related content: Six reasons why it’s cool to be a pilot

Back in the “old days” of airlines, a go-around was thought of as a failure of the pilot’s skills, perhaps through poor planning or management of the plane’s energy.

“Now, what we’ve been trying to get across is that a go-around is as normal a maneuver as a landing, and you have to be prepared and be planning for it every single time.”
Runik explained that he briefs the go-around procedure with his crew on every approach, so that the pilots are primed to climb away.

“The landing is a happy coincidence — it’s a nice happy ending,” he chuckles.

For those passengers who might be concerned when they climb away from the airport during a go-around, Runik offers reassurance that the pilots are using their skill and judgment to keep everyone safe.

“If they feel the nose come up and the engines power up, they should take great comfort that they happen to have a pilot who is very conservative with the plane’s precious cargo: you.”